Items related to Nothing 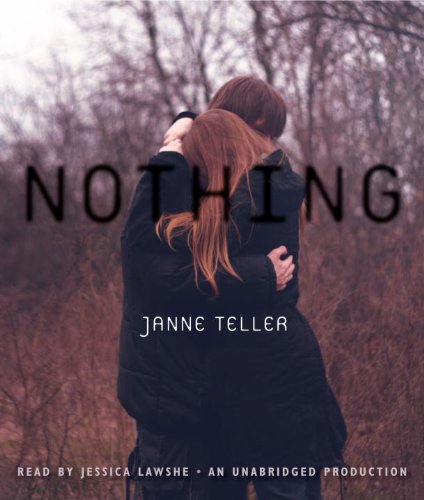 A story about everything and nothing, a boy in a plum tree, and a 7th grade no longer sure that anything means anything.

"The novel asks the immense existential questions of the meaning of life. With its unusual, rhythmic and tightly composed language it is an amazing piece of work, which teasingly, grippingly and thrillingly depicts the quest of a group of children to proving to themselves and other people that something matters in life."  Information

"Janne Teller has written a novel about nothing less than the meaning of life. This book makes a deep impression on the reader and incites continued reflection." The Danish Cultural Minister.

After working at the United Nations in conflict resolution, Janne Teller became a full-time novelist.  Since her debut novel Odin’s Island, she has published The Trampling Cat, Come, and other books that have been translated into many languages.  Nothing is her first young adult novel.  She divides her time between Copenhagen, New York, and Paris.

I have known that for a long time.

So nothing is worth doing.

I just realized that.

Pierre Anthon left school the day he realized that nothing was worth doing, because nothing meant anything anyway.

The rest of us stayed on.

And although the teachers had a job on their hands tidying up after Pierre Anthon in the classroom as well as in our heads, part of Pierre Anthon remained stuck inside of us. Maybe that was why it all turned out the way it did.

It was the second week of August. The sun was heavy, making us slow and irritable, the tarmac caught on the soles of our sneakers, and apples and pears were just ripe enough to lie snugly in the hand, the perfect missiles. We looked neither left nor right. It was the first day of school after summer vacation. The classroom smelled of detergent and weeks of emptiness, the windows reflected clear and bright, and the blackboard was yet to be blanketed with chalk dust. The desks stood two by two in rows as straight as hospital corridors, as they did only on this one day of the year. Class 7A.

We found our seats without caring to shake any familiarity into the orderliness.

There’s a time for everything. Better things, jumbled things. But not today!

Mr. Eskildsen bid us welcome with the same joke he made every year.

“Take joy in this day, children,” he said. “There would be no such thing as vacation were it not for such a thing as school.”

We laughed. Not because it was funny, but because him saying it was.

It was then that Pierre Anthon stood up.

“Nothing matters,” he announced. “I’ve known that for a long time. So nothing’s worth doing. I just realized that.” Calm and collected, he bent down and put everything he had just taken out back into his bag. He nodded good-bye with a disinterested look and left the classroom without closing the door behind him.

The door smiled. It was the first time I’d seen it do that. Pierre Anthon left the door ajar like a grinning abyss that would swallow me up into the outside with him if only I let myself go. Smiling at whom? At me, at us. I looked around the class. The uncomfortable silence told me the others had felt it too.

We were supposed to amount to something.

Something was the same as someone, and even if nobody ever said so out loud, it was hardly left unspoken, either. It was just in the air, or in the time, or in the fence surrounding the school, or in our pillows, or in the soft toys that after having served us so loyally had now been unjustly discarded and left to gather dust in attics or basements. I hadn’t known. Pierre Anthon’s smiling door told me. I still didn’t know with my mind, but all the same I knew.

All of a sudden I was scared. Scared of Pierre Anthon.

We lived in Tæring, an outpost to a fair-size provincial town. Not swank, but almost. We’d often be reminded of the fact. Nobody ever said so out loud, yet it was hardly left unspoken, either. Neat, yellow-washed brick homes and red bungalows with gardens running all the way round, new gray-brown rows with gardens out front, and then the apartment houses, home to those we never played with. There were some old timber-framed cottages, too, and farms that were no longer farms, the land developed into town, and a few rather more imposing whitewashed residences for those who were more almost-swank than the rest of us.

Tæring School was situated on the corner of two streets. All of us except Elise lived down the one called Tæringvej. Sometimes Elise would go the long way around just to walk to school with the rest of us. At least until Pierre Anthon left.

Pierre Anthon lived with his father and the rest of the commune in an old farmhouse at Tæringvej number 25. Pierre Anthon’s father and the commune were all hippies who were still stuck in ’68. That was what our parents said, and even though we didn’t really know what it meant, we said it too. In the front yard by the street there was a plum tree. It was a tall tree, old and crooked, leaning out over the hedge to tempt us with its dusty red Victoria plums, which none of us could reach. Other years we’d jump to get at the plums. We stopped doing that. Pierre Anthon left school to sit in the plum tree and pelt us with unripe plums. Some of them hit home. Not because Pierre Anthon was aiming at us, because that wasn’t worth it, he proclaimed. It was just chance that made it so.

He yelled at us too.

“It’s all a waste of time,” he yelled one day. “Everything begins only to end. The moment you were born you began to die. That’s how it is with everything.”

“The Earth is four billion, six hundred million years old, and you’re going to reach one hundred at the most!” he yelled another day. “It’s not even worth the bother.”

And he went on, “It’s all a big masquerade, all make-believe and making out you’re the best at it.”

Nothing had ever indicated that Pierre Anthon was the smartest among us, but suddenly we all knew he was. He was onto something. Even if none of us cared to admit it. Not to our parents, not to our teachers, not to one another. Not even to ourselves. We didn’t want to live in the world Pierre Anthon was telling us about. We were going to amount to something, be someone.

The smiling door wasn’t going to lure us.

That was why we came up with the idea. “We” is perhaps an exaggeration, because it was Pierre Anthon who got us going.

It was one morning when Sofie had been hit in the head by two hard plums one after another, and she was so mad at Pierre Anthon for just sitting there in his tree, disheartening all of us.

“All you ever do is sit there gawking. Is that any better?” she yelled.

“I’m not gawking,” Pierre Anthon replied calmly. “I’m contemplating the sky and getting used to doing nothing.”

“The heck you are!” Sofie yelled angrily, and hurled a stick up at Pierre Anthon in the plum tree. It landed in the hedge, way beneath him.

Pierre Anthon laughed and hollered so loud they could have heard him all the way up at the school.

That was when we understood we had to get Pierre Anthon out of that plum tree.