Items related to The Sweet Girl 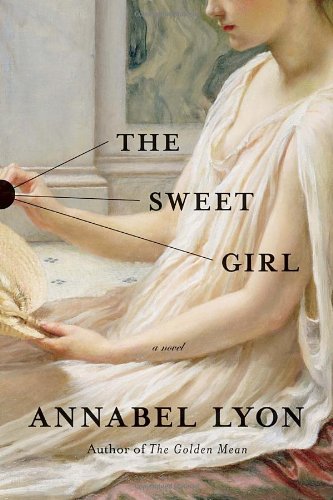 Annabel Lyon’s first novel, The Golden Mean, was a number one best seller in Canada that won the Rogers Writers’ Trust Fiction Prize, was short-listed for the Scotiabank Giller Prize and the Governor General’s Award for Fiction, and has been translated into fourteen languages. She is also the author of a story collection, Oxygen; a book of novellas, The Best Thing for You; and two juvenile novels, All-Season Edie and Encore Edie. Lyon lives in British Columbia with her husband and two children.

The first time I ask to carry a knife to the temple, Daddy tells me I’m not allowed to because we’re Macedonian. Here in Athens, you have to be born an Athenian girl to carry the basket with the knife, to lead the procession to the sacrifice. The Athenians can be awfully snotty, even all these years after our army defeated their army.

“I want to see, though,” I say. I have seven summers. “If you carry the basket, you get to watch from right up front.”

The next morning he takes me to the market. Crowds part for him respectfully; Macedonian or not, he’s famous, my daddy. “Which one?” he asks.

I take my time choosing. It’s late spring, baby season, and there are calves and piglets and trays of pullets, too. Around us, men speak of the army and when it will return; surely soon, now that the Persians are defeated and their king is on the run. I finally choose a white lamb crying for its mother and we walk it home. I hold the tether. In our courtyard, we lay out the basins and cloths and Daddy’s kit.

He sits back on his heels, my daddy, to consider the question. He scratches his freckled forehead with a finger and smiles at me with his sad grey eyes. “Because it’s cute,” he says finally.

He has the lamb’s neck pinned with a casual hand. Its eyeball is straining and rolling, and it’s wheezing. Its tongue is a leathery grey. I pet its head to calm it. Daddy shifts his grip to the jaw. I put my little hand over his big hand and we slit its throat quick and deep. When it’s bled out into the basin, Daddy asks me where I’d like to start.

“What am I going to do with you?” Daddy says in the middle of the dissection, looking at my hands all bloody, at the blood streaking my face. We’ve disjointed a leg and I’m making it flex by pulling the tendon. He’s holding an eyeball between two fingers, gingerly.

We grin at each other.

“Little miss clever fingers,” Herpyllis says from the archway nearest the kitchen. She shifts sleeping Nico to her hip—Nico, her blood-son, my little half-brother—so she can pull a couch into the sun and watch. I remember when he was born, though Herpyllis says I was too young. I remember his wrinkly face and his grip on my finger. I remember kissing and kissing him, and crying when he cried. I would lean against Herpyllis’s knee and open the front of my dress to nurse my doll, Pretty-Head, off my speck of a nipple, while Herpyllis nursed Nico, one hand playing in my hair. I’ve been her daughter since I was four.

“I’ll remind you of this the next time you tell me you’re too clumsy to weave,” Herpyllis says.

I slop some meat into the bowl she’s given us, spattering droplets of blood onto my dress.

“Filthy child,” she says. “Who’s going to want to marry you?”

“One of my students,” Daddy says promptly. “When the time comes. There won’t be a problem.”

From all over the world, students come to Daddy’s school here in Athens, the Lyceum. Kings send their sons; our own Alexander belonged to Daddy, once. Some of them are wealthy enough to please even Herpyllis. They will see my worth, Daddy says.

“What is her worth, exactly?” Herpyllis is irritable now. Carelessly, I’ve spattered blood on the lamb’s wool, which she wants for a tunic. She calls for water to soak it. Nico sighs dramatically in his sleep, flinging out a pudgy arm.

Daddy sits back on his heels, considering the question. I make a face at Herpyllis, who makes one back. She tucks Nico’s arm in and he sighs again, more quietly.

“It’s interesting.” Daddy looks at Nico. “The face of a child reflects the face of both parents. Perhaps the mind works similarly? If both parents are clever, the offspring—”

“Or not suppress them, at any rate.”

“I’m not getting married,” I say. Usually I’m content to listen to their conversations, but this one is irresistible.

“Not for a long, long time,” Daddy adds. They think I’m scared, and want to comfort me. “Years and years. Girls marry much too young, these days. We should emulate the Spartans. Seventeen, eighteen summers. The body must finish developing.”

“I’m not getting married,” I say again, happily. “May I keep the skull?”

“We’ll boil it clean,” Daddy says. “What will you do instead, then?”

Gravely, Daddy and Herpyllis agree this is an excellent ambition.

Tycho, our big slave, brings the bowl of water Herpyllis called for. I smile at him and he nods. He’s my favourite. Last summer he taught me to suck mussels right from their shells, but Herpyllis reproved him. He understood: little girls reach an age when familiarity with slaves must end. She hadn’t been unkind; she’d been a servant herself until Daddy chose her, after my mother died. She was harshest with me, about my manners and appearance and behaviour, and that was because she loved me so much.

I remember the feel of the mussels, plump and wet, and the salt tang. I sneak a lick of lamb’s blood. It’s still warm.
--
“Daddy took the whole day away from his school for you,” Herpyllis tells me later that afternoon, hacking with less precision at the parts we brought to her kitchen. She isn’t displeased, though. We’ll have a feast tonight, and soup for days. “You’ll be keeping the bones, I suppose?”

Bones are an excellent puzzle, Daddy says. I can apply myself to them and not get bored for weeks. Daddy knows I get bored. Herpyllis knows, too, but her solutions are less interesting—embroidery, crafts.

At bedtime, Daddy comes to tuck me in. “All right, pet?” he asks.

I ask him if we can do a bird next.

We chat until Herpyllis puts her head around the door frame and tells Daddy I need my beauty sleep.

“Why?” I say. Daddy and Herpyllis laugh.

At the door, he hesitates. “What we did today,” he says. “Even if you were allowed, the sanctuary isn’t the place for that. You understand?”

His lips quirk. “Why do you think?”

I close my eyes and see the temple, the hush and the gloom and the long shafts of light with the dust motes turning in them, the piles of sacred offerings, the guttering flame, the smell of spice, the priest so cool and glorious in his robe. And outside, in the sanctuary, the stone face of the god, and the gangly-legged lamb led so simply to the feet of the statue.

“Herpyllis will always let you use the kitchen,” comes my father’s voice from far away. I don’t open my eyes. In the sanctuary, the lamb’s death is an ecstasy. The bones and the blood aren’t specimens there; they’re a mystery that doesn’t need solving. I think of the sadness Daddy talked about, feel it rinse through me, but it’s not for the lamb. It’s the gods I feel sorry for. What must they think, that we opened an animal without them today? That we didn’t invite them at all? I imagine their big, beautiful faces, suffused with pain. That little girl, that one right there: doesn’t she love us? What are we going to do with her?

“She’s crying,” I hear Herpyllis say. “You horrible man. What have you done to her?”

Someone comes close with a lamp.

“Open your eyes, Pytho,” Daddy says, but I keep them shut. I’m looking at the insides of my own eyelids now, all red and spidery. “Are you crying?”

I get a kiss on each cheek, Daddy’s whiskers and Herpyllis’s sweet scent. She stays after he leaves, sitting beside me on my bed. “You don’t have to help him if it upsets you,” she says.

I open my eyes.

“Who loves you, anyway?” she says.

She snuffs the lamp but doesn’t move. We sit in the dark.

“The poor gods,” I say, and then I bury my face in her lap and sob.