Items related to The God Who Hung on the Cross

Rosser, Dois I., Jr.; Vaughn, Ellen Santilli The God Who Hung on the Cross

The God Who Hung on the Cross 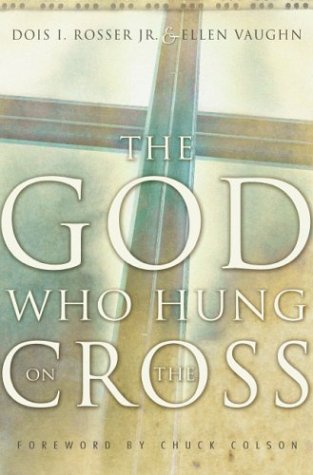 A founder of International Cooperating Ministries relates his visit to a remote Cambodian village where he encountered a group of people who wanted to learn more about a mysterious God who hung on the cross and who they believed miraculously saved them from Communist soldiers.

You won’t see these stories on CNN or read them in your local newspaper, but Jesus Christ is doing miracles in some of the most unlikely places around the world. And He can do so right where you live as well. Right now.

This book will help you break you out of the box of limited Christianity and tap into God's awesome power—like its author, whose faith has propelled him out of the boardroom and into villages in Mongolia, India, Congo, Cuba, and dozens of other needy nations. Dois Rosser has taken his earthly fortune and strategically invested it in the single most powerful means of changing the world today: building churches and broadcasting the gospel. In so doing, he has seized a big-picture vision that extends far beyond our church-as-usual experience in the United States.

Rosser takes you on a jolting jeep ride to a village in India, where feeble lepers are joyfully building their church, stone by stone. He invites you to a funeral in Cuba, where the gospel’s message of hope in the face of death brings a Communist tour guide to new life in Christ. You’ll journey to the Ganges River, to the biggest Hindu festival in world history . . . marvel at the miraculous healing that founded a church in Zimbabwe . . . and visit a Ukrainian church built with government-donated bricks—from a former Soviet missile silo. And with Cambodian villagers staring execution in the face, you’ll stand in awe at the power and mercy of the God Who hung on a cross.

But The God Who Hung on the Cross is not just an armchair travelogue for comfortable Christians. Its exotic tales from abroad can change your life here at home. You’ll discover that when you let go of "your" time and "your" treasure, you can experience the abundant, liberating power of God at work—not just in far-flung places around the globe, but in your own journey with Christ, wherever you walk with Him.

Christ is building His church, just as he said he would. And as He does, He delights in using any ordinary person to accomplish His great miracles. The God Who Hung on the Cross holds up an exhilarating vision of the body of Christ at work in the world—and equips you for the small but significant opportunities of everyday life.

Dois I. Rosser , Jr. is chairman of the POMOCO Auto Group, and chairman and founder of International Cooperating Ministries. He has served on the boards of Prison Fellowship Ministries, Trans World Radio, the Lausanne Conference for World Evangelism, and Leighton Ford Ministries. He lives in Hampton, Virginia with his wife.;Ellen Vaughn is an award-winning author and speaker. Her works of fiction include The Strand and Gideon's Torch (co-authored with Chuck Colson). She collaborated with Colson on eight other non-fiction books. She speaks frequently at Christian retreats, and has been featured at writers' seminars in the U.S. and Canada. A native of Washington D.C., Vaughn and her husband, Lee, live in Virginia with daughter Emily, twins Walker and Haley, and an enormous dog named after C.S. Lewis.

1. The God Who Hung on the Cross

2. The God Who Hung on the Cross

3. The God Who Hung on the Cross

4. The God Who Hung on the Cross

5. The God Who Hung on the Cross

6. The God Who Hung on the Cross Rosser, Dois I., Jr. and Vaughn, Ellen Santilli

7. The God Who Hung on the Cross Rosser, Dois I., Jr. and Vaughn, Ellen Santilli