Items related to The Morphology of Biblical Greek: A Companion to Basics... 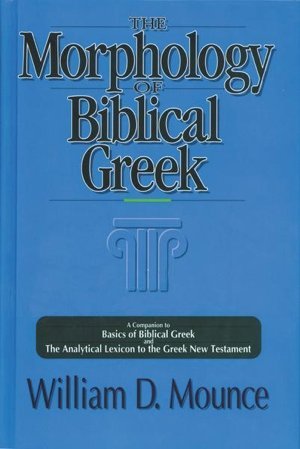 The purpose behind The Morphology of Biblical Greek is to show that Greek is very regular in the way it forms words-if you know the rules, it explains why Greek words do what they do, in a way that second-year Greek students can understand.

The Morphology of Biblical Greek explains, in a way second-year Greek students can understand, how Greek words are formed. It shows that Greek word formation follows a limited set of rules. Once these rules are understood, it becomes clear that forms which once seemed to be irregular or an exception actually follow these morphological rules. The Morphology of Biblical Greek has five parts:
1.The rules that determine how Greek words change.
2. The rules of verb formation, from augment to personal ending.
3. Paradigms for every type of noun and adjective form, with all the words that belong in each category and any peculiarities of a given word.
4. All the verbs and principal parts, with verbs that follow the same rules grouped together.
5. An index of all words in the New Testament with their morphological category.
The Morphology of Biblical Greek contains the most complete set of paradigms for nouns, verbs, adjectives, and pronouns available for New Testament Greek.

William D Mounce (PhD, Aberdeen University) lives as a writer in Washougal, Washington. He is the President of BiblicalTraining.org, a non-profit organization offering world-class educational resources for discipleship in the local church. See www.BillMounce.com for more information. Formerly he was a preaching pastor, and prior to that a professor of New Testament and director of the Greek Program at Gordon-Conwell Theological Seminary. He is the author of the bestselling Greek textbook, Basics of Biblical Greek, and many other resources. He was the New Testament chair of the English Standard Version translation of the Bible, and is serving on the NIV translation committee.