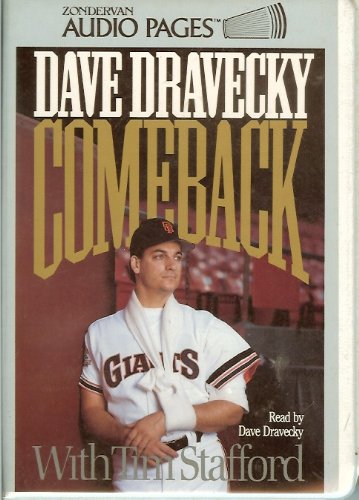 Dave Dravecky, former all-star pitcher for the San Francisco Giants, is the best-selling author of Comeback and When You Can’t Come Back. He is a speaker and the founder of Outreach of Hope Ministries. With his wife, Jan, he lives in Colorado Springs

The moment was electric and unforgettable. Less than one year after cancer surgery on Dave Dravecky's pitching arm, the San Francisco Giants pitcher came back to take the mound once again. And won. Five days later, he won again . . . but tragically broke his arm. Then he broke his arm again during an on-field celebration after the Giant's won the National League Championship. In Comeback, Dravecky recounts his exciting career, from the minors to winter ball, to the majors and the earthquake-halted 1989 World Series. Dravecky has met heartbreak at every turn with determination and faith. A rallying symbol for cancer patients and anyone facing hardship, Dravecky talks about the faith that has helped him through the ordeals that ended his career and threatened his life. Millions of TV fans witnessed Dave Dravecky's unforgettable comeback. Millions more will embrace his monumental story.

Buy Used
Condition: Good
One audio cassette in the clamshell... Learn more about this copy

Book Description Harperaudio, Scranton, Pennsylvania, U.S.A., 1990. Audio Book. Condition: Good. One audio cassette in the clamshell case. Might be library withdrawal there are no library markings that all. Some shelf wear to the box. Some edge wear to the box. The tape inside sits sturdy and presentable. Enjoy this audio performance!. Seller Inventory # AudioBox8209568