Items related to Rules of Encounter 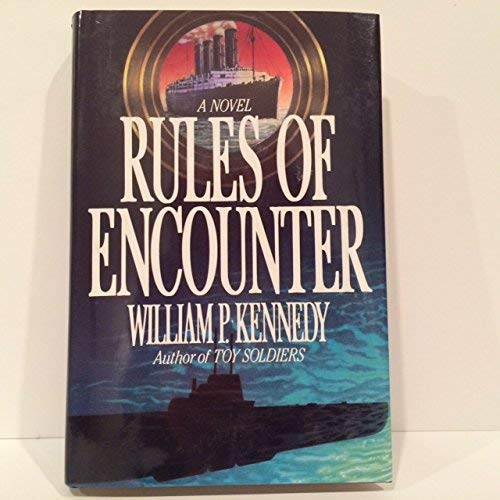 Responsible for keeping secret information from leaking to the Germans, Commander William Day learns of Churchill's intentions to have the Germans deliberately sink the Lusitania to illicit sympathy for the British, and then realizes that the woman he loves is aboard the doomed ship

An engrossing tale of love and betrayal based on the historically arguable proposition that the British knew that German submarines were likely to sink the S.S. Lusitania in 1915 and that- -most especially in the person of Winston Churchill--they in fact wanted the attack to occur so that US would be drawn into the Great War. Kennedy (The Himmler Equation, 1989, etc.) tells the story of British naval officer William Day, sidetracked to a base on the coast of Ireland after he has had the temerity to become romantically involved with the aristocratic Jennifer Beecham. During this time, the British were using the ``rules of encounter,'' the gentlemen's agreement about how naval battles were to be fought, to frustrate the efforts of the powerful German submarine fleet. The rules required U-boats to surface and determine that a vessel was actually involved in the war effort and to allow its passengers and crew to abandon ship before sinking it. Britain, meanwhile, illegally armed supply vessels and attacked German subs while denying the policy to the rest of the world. Here, Day, whose life is complicated by the natural alliance of the Irish populace with the Germans, is unaware that his superiors are using his base to allow the enemy to intercept certain shipping information so that they will attack ``neutral'' ships (a program deemed so vital that His Majesty's government assigns a merciless intelligence officer to eliminate Day if he discovers the truth). His only solace lies in the arms of his civilian aide, Shiela McDevitt. It is, of course, dramatically inevitable that the lovely Jennifer sail on the Lusitania on its fatal final voyage, providing the appropriate cliffhanger as things progress to their inexorable and bittersweet end. Kennedy knows how to tell a story, and in Commander Day he has created a courageous patriot who becomes keenly aware that the evils of war manifest themselves on both sides of the battle. A thought-provoking and enjoyable thriller. -- Copyright ©1992, Kirkus Associates, LP. All rights reserved.

Kennedy ( Toy Soldiers ) floats this war story on the plausibly relayed theory that Churchill's Admiralty tricked the Germans into attacking the Lusitania in order to sink America's neutrality and draw her into WW I. To smuggle badly needed munitions past the Germans' deadly U-boats, Sir Peter Beecham and his aide, Commander William Day, assign the contraband onto refitted passenger ships, which are off-limits to submarine attack under the Rules of Encounter. When Day and Beecham's daughter Jennifer begin a romance, Sir Peter, deeming the alliance inappropriate, has the young commander reassigned to the Irish coast. Unbeknownst to Beecham, however, Churchill's spy at this station is sending information to the Germans that will precipitate the attack on the Lusitania . Stumbling on the plan, Day tries desperately to abort it when he learns that Jennifer has sailed on the Lusitania in order to join him. At his best in the Irish segments and early submarine details, Kennedy captures the atmosphere of a world abandoning chivalric codes of conduct for wholesale brutality and ever more deadly war machines. The romantic notes don't ring as true, however, and the superficial characterizations detract from an otherwise racing read.
Copyright 1992 Reed Business Information, Inc.