Items related to Frost the Fiddler 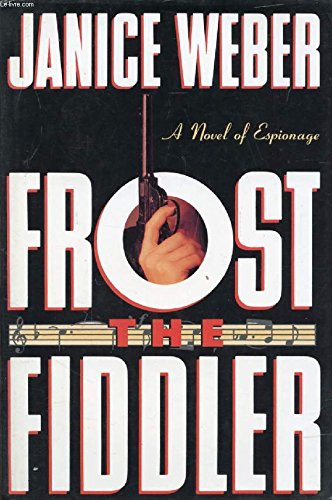 While posing as a world-class concert violinist, secret service agent Leslie Frost witnesses a murder in a Leipzig church and begins to investigate, uncovering some pre-glasnost shenanigans and a possible threat to her own life. National ad/promo.

At the time of her Carnegie Recital Hall debut at age nine, she was writing her first short stories. She has continued both pursuits, with her novels providing counterpoint to the staid world of a concert pianist, or perhaps with her recitals offsetting the staid world of a writer. She lives in Boston with her husband.

An active soloist and chamber musician, she has performed at the White House, Carnegie Hall (the big one), Symphony Hall Boston, Wigmore Hall London, and major venues in the U.S., Europe, and Asia. Her eclectic recordings include the complete Rachmaninoff transcriptions, Messiaen's "Quartet for the End of Time", a disc of Leo Ornstein's revolutionary piano works, and Liszt's 1838 version of the Transcendental Etudes. Her most recent disc, "Cascade of Roses", has a "rose" in each track, with rare appearances of Billy Mayerl's dazzling "Evening Primrose" and Ernest de Regge's "Variations on "The Last Rose of Summer."

Her novels happen between (and occasionally during) concerts. Music on some level infiltrates almost every book: Eva Hathaway writes hymns between amorous bouts, Floyd Beck met the love of his life at Carnegie Hall, Leslie Frost is a concert violinist, and Ross Major listens to Beethoven when the going gets rough. Characters without music fill the void with swinging, murder, and treason, activities musicians tend to eschew since that would detract from practice time.

High-tech gadgetry, a high-speed Harley and the high-brow world of classical music are juxtaposed in this tale of espionage and murder. It features violinist Leslie Frost as a very secret agent in a quasi-legal intelligence organization. Burr narrates in a soft, clear voice; her reading is well-paced and expressive. Her voice provides just the right mix of cool calculation and sultry softness to bring Frost's character to life and lures listeners into the story. No sound effects or music are used, and the last lines of one side are repeated at the beginning of the next. Mystery fans and other listeners in search of a good story will find that Frost the Fiddler strikes all the right chords. J.L. (c)AudioFile, Portland, Maine