Items related to The Mutiny Run 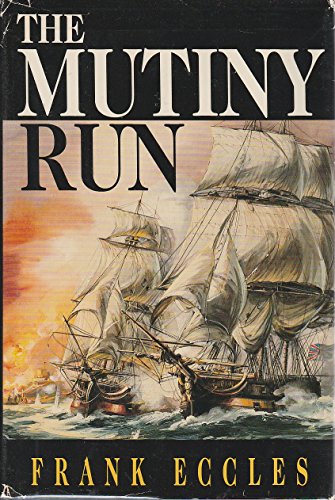 Vivid historical accuracy marks an exciting tale set in 1797, as Captain Brewster of the British ship Adamant must find a way to halt a French invasion of Ireland during a mutiny of Britain's Channel fleet.

Peter has been a working actor for over thirty years. In theatre he has played a wide range of roles, including rep all around the UK, and an active TV and film career. He has often chosen jobs involving travel. Most importantly (to him), Peter enjoyed a spell on the BBC Radio Rep. That all led to audiobooks, and his only regret about this is that he doesn't usually travel far to do it!

There's mayhem on the high seas and on the waters of the Thames in British naval historian Eccles's novel; fires, floods, fistfights, and French bullets are easier to overcome than pesky rebels stopping up London's lifeline. Midshipman John Lawson is good Captain Brewster's 18-year-old pet, a paragon of honor and loyalty aboard the Adamant, a British naval ship loaded with corruption and skulduggery. It's 1797, and the Adamant must defend His Majesty George IV's fair shores against invading French troops. En route from Liverpool to Brest, France, the big gunner encounters and joins forces with a friendly Russian racing sloop, but camaraderie becomes chaos when they sight land and the waters swarm with warmongering ``frogs.'' Readers will be as confused as the players in the ensuing skirmish: Who's on whose side? The Adamant's bickering bank of indecisive officers, consumptive ex-convict sailors, thieves, and traitors flee, switch boats, and fight with encroaching enemy troops, spies, and one another in a frenzied maritime free-for-all. Thank goodness the women aren't hurt! Women? That's right, before the embroilment a Russian aristocrat and her two daughters had left their sloop for the comfy and civilized Adamant. Their presence introduces social niceties to naval crisis; between battles the men find time to throw birthday fetes for charming daughter Victoria and engage in jaunty competitions and jealous rivalries over her. But our hero Lawson's her guy; they vow to be together right after he squelches a mutinous uprising in the Thames with now-beleaguered mentor Brewster. Eccles handles historical details with aplomb, but he founders in the deeper waters of big-picture overview and personal relationships. The headlining mutiny is a footnote, the Lawson/Victoria romance strictly dime-store paperback material. Myopic nautical adventure for initiates only; bring your own glossary. -- Copyright ©1994, Kirkus Associates, LP. All rights reserved.

Book Description St. Martin's Press, L12, 1994. Hardcover. Condition: New. Dust Jacket Condition: Very Good. All orders ship within 24 hours except Sunday & Holidays, with a tracking #. Items ship from the US. International orders may take longer for you to receive because of customs. Contact us if you have more questions before your purchase we will get back to you withing 24 hours. ; 8.30 X 5.50 X 1.30 inches; 298 pages; Slight edge shelf wear to DJ, book and text are in unread condition. Seller Inventory # 503360