Items related to F.R. Leavis: A Life in Criticism

F.R. Leavis: A Life in Criticism 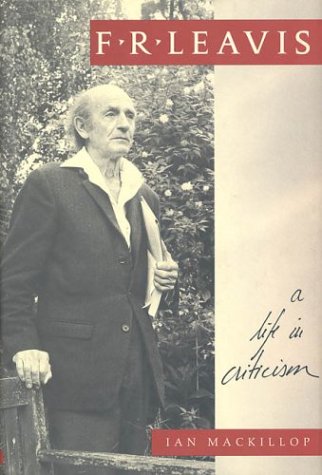 Ian MacKillop captures all of F.R. Leavis, one of the most influential literary critics of the 20th century, in this engrossing biography to give readers a fascinating chronicle of the academic life at its dizzying pinnacle.

A life of the eminent critic, a controversial figure whose ideas were influential wherever English was taught--except at Cambridge University, the institution that grudgingly employed him. Indeed, F.R. Leavis (18951978) seemed to make a career of being snubbed by the university's English department. Of the Cambridge Critics, including rivals I.A. Richards and William Empson, Leavis had the longest exile, despite (or because of) such notable works of criticism as The Great Tradition and New Bearings in English Poetry. He was also for two decades the editor of Scrutiny, an influential journal. As former pupil MacKillop (English/Sheffield Univ., England) shows in this approving but not official biography, Leavis worked passionately to establish serious standards for the study of English literature, to counter both suffocating Oxbridge classicism and Bloomsbury dillettantism. With an unreliable part-time lectureship, and the help of his unofficial study group, the ``Research Society,'' and of his equally erudite wife, Queenie (author of Fiction and the Reading Public), Leavis built his own intellectual elite within the university. Only very late in his career did he receive a stable position at Downing College. It did not lessen his combative spirit. Leavis's famous attack on C.P. Snow, whom he called ``portentously ignorant,'' was part of a broader effort to keep education in the humanities from becoming a backwater in modern Britain. Yet, citing aesthetic principles, the complex Leavis, the preeminent Lawrence scholar, refused to join the fight to get the ban on Lady Chatterley's Lover lifted. Of the rebarbative Leavis's many sides explored here, the one most likely to stir immediate sympathy is his experiences on an ambulance train during WW I. MacKillop, as objective as a Leavisian can be, does not ignore his mentor's more embarrassing fallings-out with his college and with some of his prot‚g‚s. A thorough and candid examination from the academic trenches of the most combative of the Cambridge Critics. (b&w photos, not seen) -- Copyright ©1997, Kirkus Associates, LP. All rights reserved.

MacKillop (English, Univ. of Sheffield; The British Ethical Societies, 1986), a student of Leavis at Cambridge, has taken on a formidable task?to write a biography of a man who instructed his literary executors to discourage biographers. By necessity, then, MacKillop focuses almost exclusively on the professional career and writings of this most famous of 20th-century critics. Frank Raymond Leavis was born in Cambridge and returned there after World War I to take his English degree; he spent the rest of his life associated with one or another Cambridge college. Although a permanent faculty position forever eluded him, his work, especially the magazine Scrutiny, is now inextricably linked with Cambridge and its literary philosophy. MacKillop's analysis of the literary milieu during Leavis's life is minutely detailed, especially for Americans unfamiliar with the British system. The result is an exhaustive study of Leavis's work, if not the man. For specialized collections only.?Shelley Cox, Southern Illinois Univ., Carbondale
Copyright 1997 Reed Business Information, Inc.