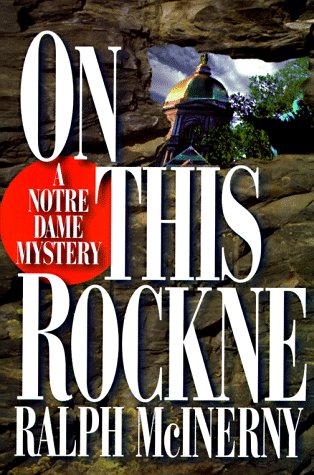 A new series set at Notre Dame University, where the author has taught for years, introduces the Knight brothers--Philip, a P.I., and Roger, the philosophy professor--in their first case, which involves ten million dollars, a dead trustee, and the great coach Knute Rockne. 15,000 first printing.

On the football-obsessed campus of Notre Dame, Marcus Bramble, a wealthy alum with an unhealthy passion for the sport, says he'll contribute $10 million if it's put towards a memorial to Knute Rockney, the University's legendary football coach. When Madeline Rune, a Notre Dame trustee, is found dead after disparaging remarks about the donation, Bramble, along with Madeleine's womanizing husband, is suspected of foul-play. But when her husband also turns up dead, the case becomes more impossible than a Hail Mary.

As detective Philip Knight and his brother, brilliant philosophy professor Roger Knight, scour the campus for a killer, they're caught in a high-stakes scrimmage between the mega-bucks donor determined to resurrect Knute Rockne and the Notre Dame academia, dead-set on burying football for good. And in between this bitter campus infighting, the brothers must prevent the murderer's next play before football becomes the ultimate blood sport.

Ralph McInerny has taught philosophy for forty years at the University of Notre Dame, where he is Director of the Jacques Maritain Center.