Items related to The Infernal Device and Others: A Professor Moriarty... 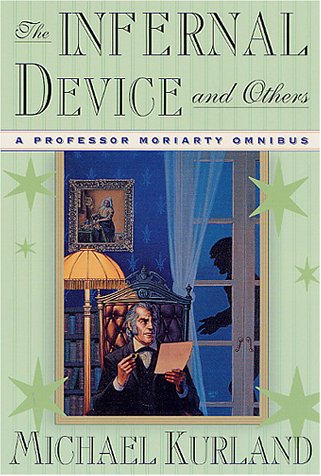 Since their original appearanc more than two decades ago, Michael Kurland's two novels feature Professor James Moriarty--The Infernal Device and Death by Gaslight--have been among the most acclaimed of the works based on the characters first introduced by Authur Conan Doyle. In Doyle's original stories, Professor Moriarty is the bete noire of Sherlock Holmes, who deems the professor his mental equivalent and ethical opposite, declares him "the Napoleon of Crime, " and wrestles him seemingly to their mutual deaths at Reichenbach Falls. But indeed there are two sides to every story, and while Moriarty may not always tread strictly on the side of the law, he is also, in these novels, not quite about the person that Holmes and Watson made him out to be. In Kurland's fictions about Moriarty, the truth is finally revealed:

The Infernal Device--A dangerous adversary seeking to topple the British monarchy places Moriarty in mortal jeopardy, forcing him to collaborate with his nemesis Sherlock Holmes.

Death by Gaslight--A serial killer is stalking the cream o England's aristocracy, baffling both the police and Sherlock Holmes and leaving the powers in charge to play one last desperate card: Professor Moriarty.

The Paradol Paradox--The first new Moriarty story in almost twenty years, it has never before appeared in print.

Brilliantly and vividly evoking late Victorian England in all its facets, this first-ever omnibus of the adventures of Proefssor James Moriarty will delight longtime fans as well as readers new to the milieu.

Michael Kurland has written many nonfiction books on a vast array of topics, including How to Solve a Murder, as well as several novels. Twice a finalist for the Edgar Award (once for The Infernal Device), presented by the Mystery Writers of America, Kurland is perhaps best known for his novels about Professor Moriarty. He lives in Petaluma, California.