Items related to Unholy Fire: A Novel of the Civil War

Unholy Fire: A Novel of the Civil War 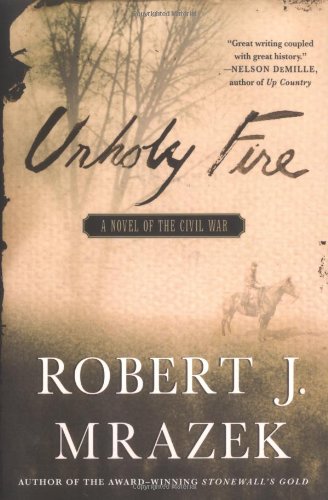 John “Kit” McKittredge is a young Federal officer from Maine who is terribly wounded in one of the first battles of the Civil War. Still unfit for active duty after nine months in hospital, he is recruited by an unorthodox colonel named Valentine Burdette to work in the Provost Marshal General’s office in Washington.

The beleaguered Capital, now swollen to seven times its pre-war population, is filled with saloons, brothels, spies, thieves and murderers. It is also rife with official corruption and political intrigue.

While investigating what appears to be a routine case of military procurement fraud, Kit becomes embroiled in the murder of a beautiful young woman who has had the misfortune to attend the birthday party of Union General Joseph Hooker, the notorious and charming libertine.

The investigation leads Kit through a series of harrowing adventures—both on the battlefield and in the Capital’s darkest dens of depravity—until he and Val Burdette must confront a vast criminal conspiracy that threatens both their own lives as well as the fate of the Republic.

This riveting thriller by the award-winning author of the critically-acclaimed Stonewall’s Gold hauntingly brings to life one of the most dramatic periods of the Civil War.

Bob Mrazek lives and writes in upstate New York and Maine. A former five-term member of Congress, he co-authored the law that saved the Manassas battlefield from being bull-dozed into a giant shopping center. His first book, Stonewall’s Gold, won the Michael Shaara Prize as best Civil War novel of 1999, and has been published in nine countries around the world.

Having miraculously survived a stomach wound early in the Civil War, young Union officer John "Kit" McKittredge is assigned to investigate corruption in the Union Army. The murder of a young woman leads him into a conspiracy that could topple the Union while putting both his career and his life in danger. Patrick Lawlor captures the youth and inexperience of McKittredge and also conveys the weariness of the older officers. Women's voices are effective, including those with French accents. Lawlor's pacing and energy, coupled with the suspense and character interest of the story, result in a satisfying production. M.A.M. © AudioFile 2003, Portland, Maine-- Copyright © AudioFile, Portland, Maine

1. Unholy Fire: A Novel of the Civil War

2. Unholy Fire: A Novel of the Civil War

3. Unholy Fire: A Novel of the Civil War