Items related to The Fruit Palace: An Odyssey Through Colombia's...

The Fruit Palace: An Odyssey Through Colombia's Cocaine Underworld 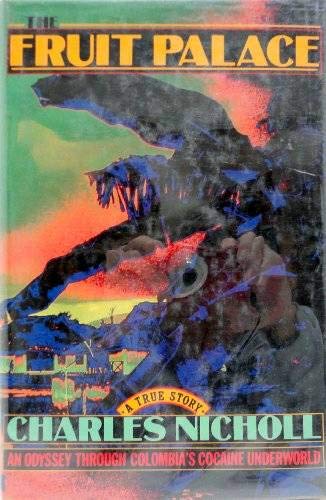 Writer Charles Nicholl undertakes a nervy quest into the dangerous underworld of Colombia's billion-dollar cocaine smuggling enterprise where he encounters the toughest backstreet bars in Bogota, hidden valleys in the Sierra Nevada, and an array of unruly characters

Charles Nicholl is on a quest for "The Great Cocaine Story." The time is the early eighties and the place...Colombia. The story actually begins twelve years earlier in the tiny, scruffy seaport town of Santa Marta, described by some as "a victim of its privileged geographic location." "The town had the feel of a tropical smugglers' den. It was a rakish, seedy, avaricious little place, but somehow exhilarating in the way it lived according to its own laws." The Fruit Palace, a dismal whitewashed café that legally dispenses tropical fruit juices, has another purpose as the meeting place for a variety of black market activities and the place where Nicholl unwittingly begins his quest.

He returns to Colombia in 1983 "on assignment." His research is thorough, the risks he takes are serious, and characters he encounters--colorful, cranky and always looking older than their years--are so thoroughly fleshed out, you almost forget you're reading nonfiction. Nicholl survives dangerous encounters with powerful drug lords, fever, earthquake, solo treks through treacherous jungles--all to deliver this decadent and compelling journey through the cocaine underworld of Colombia.

The Fruit Palace sells only juice. But it happens to be located in Santa Marta, the town that is to Colombia's cocaine trade what Lourdes is to holy water. It is also where Charles Nicholl got his first taste of the "white business" that occupies Colombians from street hustlers to cabinet ministers. And that taste launched Nicholl on a fanatical quest for "The Great Cocaine Story," which he relates with madcap energy and vividness in this classic travel book.

Charles Nicholl careens from shantytowns and waterfront barrios to steamy jungle villages and slaughterhouses. He survives fever, earthquake, and discovery by a dealer who threatens to "check his oil" with a knife. And he emerges with a tour de force that is a triumph of intrepid reporting and suspense.

1. The Fruit Palace: An Odyssey Through Colombia's Cocaine Underworld

2. The Fruit Palace: An Odyssey Through Colombia's Cocaine Underworld