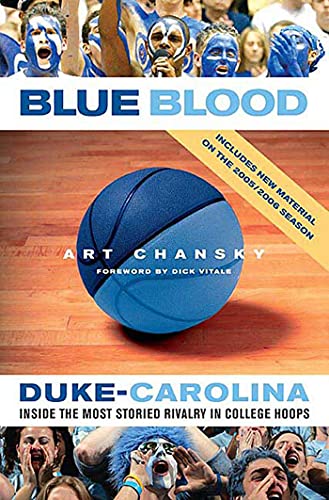 "It's not about me versus Dean, or me against Roy or Dean against Vic Bubas. Duke and Carolina will be here forever."
---Mike Krzyzewski

For fifty years the rivalry between Duke and Carolina has featured famous brawls, endless controversy, long-nurtured hatred---and some of the best basketball ever played in the history of the sport. For Duke and UNC players and fans, the competition is not about winning a prize, trophy or title---it's about bragging rights and raw pride.
Blue Blood is a thrilling chronicle of the Duke-Carolina rivalry as it has evolved over the last fifty years. With unparalleled insider access, veteran journalist and author Art Chansky details the colorful, revered, and respected rivalry---for the first time ever.
The Duke-Carolina rivalry has fostered more than thirty former players from the two schools playing or coaching in the NBA; it has enchanted a nation of spectators to watch games between the archrivals---garnering some of the highest regular-season TV ratings in history. Blue Blood celebrates the history of this rivalry, the traditions, the heritage, and, most importantly---spectacular basketball.

"You can see the beads of sweat on coaches' and players' faces as the tale by this former sports editor for the Durham Morning Herald unfolds."
---News & Record (Greensboro, NC)

"A book on this rivalry was long overdue, and Chansky does it justice. This is sure to become a staple of every Tar Heel or Blue Devil fan's library."
---InsideCarolina.com

"A holy text for both sides of the rivalry. . . . This book is a coffee table necessity for anyone that claims to have a background in college basketball . . . you need to read this book cover to cover as many times as possible until you can recite from it."---The East Carolinian

"I'm biased, but I think this is the greatest rivalry, not just in college basketball, but in all of sports."
---Dick Vitale, ESPN

"Art Chansky has more than learned what Duke-Carolina is all about; he's lived it for more than thirty years. His columns, commentaries, and characterizations have long been on the money, and Blue Blood puts them all together in an anticipated and entertaining work that reads more like a novel. But truth is stranger than fiction, and Chansky tells it just like it is."
---Curry Kirkpatrick, who has covered Duke-Carolina for Sports Illustrated, ESPN, and ESPN the Magazine

Art Chansky is an author and sportswriter who has covered basketball on Tobacco Road for more than thirty years. By day, he is a sports marketing executive who developed an all-sports competition between Duke and Carolina called the Carlyle Cup. He has written The Dean's List: a Celebration of Tar Hell Basketball and Dean Smith and Dean's Domain: The Inside Story of Dean Smith and His College Basketball Empire on North Carolina basketball and coach Dean Smith. He lives with his family on the "Duke side" of Chapel Hill.

Chapter One
Tides of March

Under the glint of the newly redesigned 2005 NCAA Tournament trophy, North Carolina’s first in twelve years, many Tar Heel fans could not fully enjoy the moment.

Their latest national championship had been achieved in the unlikeliest of ways—by a second-year head coach, who finally had assuaged the anger he caused from first turning down the UNC job in 2000, leading a largely bastardized team of players that former coach Matt Doherty had recruited.

Roy Williams was back to stay, for sure, despite almost annual offers to coach the in-flux Los Angeles Lakers. But the stepchildren who had won his first NCAA title after four previous trips to the Final Four at Kansas would not be back, that much was almost certain. Three were graduating and the other top four players were underclassmen who were all likely to enter the NBA draft.

Even after their team cut down the nets in St. Louis, returning Carolina to national prominence following a turbulent transition from the Dean Smith era, the specter of archenemy Duke loomed as large as ever. The Blue Devils still dominated the rivalry in recent years, beating Carolina in fifteen of the last eighteen meetings and running up unprecedented strings of ACC regular season and tournament championships.

And, Duke was not losing its entire team. Supposedly, only one starter, senior Daniel Ewing, was departing after All-American and ACC Player of the Year J. J. Redick reaffirmed his decision to stay for his senior year and All-ACC center Shelden Williams, the best shot-blocker and post defender in Duke history, also decided not to test the NBA.

"I want to accomplish some of the same things Carolina did," Williams said in his announcement to return.

Both programs were bringing in stellar recruiting classes for the 2005–06 season, but Duke’s was rated higher, led by McDonald’s All-Americans Greg Paulus and Josh McRoberts. Heading Carolina’s class was Tyler Hansbrough, a big white center like so many others that had anchored Roy Williams’s Kansas teams, but he would have few seasoned players to help his adjustment.

Duke was loaded. The ever-increasing Blue Devil fan base, pervasive everywhere but in the state of North Carolina, was already licking its collective chops over next year’s Final Four in Indianapolis, where the Dukies had won the first of their three national championships in 1991.

As was the case a year before, when after Roy Williams turned down the job privately and Mike Krzyzewski freaked out another first-year Duke president, Dick Brodhead, by publicly flirting with the Lakers (he had done the same to Nan Keohane in 1994 over an offer from Portland), the off-season found both basketball juggernauts in the news.

Tar Heel players Raymond Felton, Sean May, Rashad McCants, and Marvin Williams, who together with seniors Jawad Williams, Jackie Manuel, and Melvin Scott represented 90 percent of their team’s scoring, 80 percent of its rebounds and assists, and all but 20 of its blocked shots, indeed turned pro and were all NBA lottery picks—the first time four underclassmen from the same program had ever gone in the first round.

Duke junior Shavlik Randolph, among the most highly recruited prep players in North Carolina history and grandson of N.C. State legend Ronnie Shavlik, also applied for the NBA draft despite averaging only six points a game. The stunning announcement followed widespread reports of financial trouble in his family. His father, Kenny Randolph (a UNC graduate), had filed bankruptcy for two of the businesses he and his family had inherited from Ronnie Shavlik. Krzyzewski was miffed that Randolph did not follow his advice to stay in school and made plans to go on without him. Randolph went undrafted but hooked on as a free agent with the Philadelphia 76ers, whose general manager was former Duke defensive star Billy King.

In October, just after preseason practice began, Roy Williams got a surprise phone call from high school senior Brandan Wright of Tennessee, a consensus schoolboy All-American. The 6` 9" forward, who had visited UNC the weekend before and attended Late Night with Roy, told Williams he wanted to play for the Tar Heels. Speechless, a rare state for the talkative Carolina coach, Williams had figured that Wright was going to Duke and now had to retract a scholarship offer to Memphis forward Thaddeus Young, who eventually signed with Georgia Tech.

As Williams continued rebuilding the Carolina program, the Wright commitment marked the first player he had landed that Duke also wanted but clearly lost to the Tar Heels. Williams had been closely aligned with Hansbrough since he started recruiting him for Kansas, and fellow freshman Marcus Ginyard was scouted but not offered a scholarship by the Blue Devils. Wright, together with point guard Ty Lawson and shooting guard Wayne Ellington, gave UNC its second recruiting class of three consensus top-ten players in four years or since Felton, May, and McCants enrolled in 2002.

Duke, of course, still had its own studly list of commits who would sign letters of intent that November, including 6` 6" Jon Scheyer from Glenbrook, Illinois, who had played for the brother of Illinois coach Bruce Weber, and Ellington’s Philadelphia high school teammate Gerald Henderson. But Wright’s decision left Krzyzewski and his staff scrambling to fill the spot earmarked for a strong forward. They immediately turned their attention to unsigned New Jersey forward Lance Thomas, who had originally committed to Arizona but said he’d wait until the spring to sign.

In late October, Krzyzewski was named coach of the USA Basketball team, an appointment that promised to keep him in the headlines through the 2008 Olympics in Beijing. He was the first college coach to hold the position since the United States began using NBA players in the Olympics, and it fulfilled another lifetime goal for the Army graduate who always had loved international basketball, long before serving as an assistant to Chuck Daly (a former Duke assistant coach himself) on the original 1992 Dream Team in Barcelona.

With other ACC teams also losing key players, Duke was a landslide favorite to win the league. They lived up to their top-ranked billing by sweeping the preseason NIT before routing second-ranked Texas in a made-for-national-TV game at the Meadowlands behind 41 points by Redick. The Blue Devils weren’t threatened until they needed a forty-footer from Sean Dockery at the buzzer to stave off a home upset to Virginia Tech. Their best early win might have been breaking a three-game losing streak to Maryland, before which Krzyzewski pulled one of his forever-hokey but famously effective motivational ploys. The entire team signed the Duke logo on Coach K Court in Cameron Indoor Stadium, publicly indicating their intention of defending their home court against a team to whom they had lost to on that floor last season and three straight times overall.

Carolina, picked to finish sixth in the ACC, needed an ugly three-pointer by David Noel, the only returnee with any experience, to defeat low-major Gardner-Webb in its opening game. After a close home loss to Illinois in a national championship rematch for the ACC-Big Ten Challenge, Carolina upset then tenth-ranked Kentucky in Lexington but went into the holiday break on a blowout loss at Southern Cal that did not bode well for the ACC season. However, several unsung players were emerging to help Hansbrough, the team’s top scorer and rebounder. Junior forward Reyshawn Terry showed flashes of NBA talent and former walk-on guard Wes Miller started draining three-pointers with reg

1. Blue Blood: Duke-Carolina: Inside the Most Storied Rivalry in College Hoops

3. Blue Blood: Duke-Carolina: Inside the Most Storied Rivalry in College Hoops (Paperback or Softback)

4. Blue Blood : Duke-carolina: Inside the Most Storied Rivalry in College Hoops

5. Blue Blood: Duke-Carolina: Inside the Most Storied Rivalry in College Hoops

7. Blue Blood: Duke-Carolina: Inside the Most Storied Rivalry in College Hoops

8. Blue Blood: Duke-Carolina: Inside the Most Storied Rivalry in College Hoops

10. Blue Blood: Duke-Carolina: Inside the Most Storied Rivalry in College Hoops