Items related to Make It Memorable 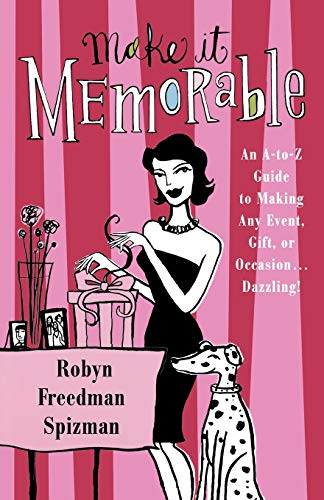 Learn How to Make Any Occasion Shine!

Have you ever attended a party so clever it had you talking for days? Or received an invitation that made you feel like royalty? Were you ever given a gift so "you" that you never forgot it? Make It Memorable is an A to Z thematically organized resource for making the most of every special occasion and highlighting the little things in life. From anniversaries and birthdays through weddings and zero-cost ideas, it includes:

- It was a very good year! For a special anniversary, select bottles of wine with vintages from special years for the couple---the year they met, the year they married, etc.
- A blast from the past! For a memorable birthday for an old friend, rent a limo and take a tour down memory lane---past the birthday girl's high school, first house, etc., reminiscing as you go.
- Love is in bloom! For a garden party shower theme, have each guest bring a plant. Distribute the plants around the room to create your own greenhouse atmosphere for the bride.
- A to-do bag just for you! For a get-well present, create a to-do bag filled with things your friend can do while recuperating. You can include everything from favorite missed shows on videotape to assorted magazines and goodies.
- Plus fabulous favors, inviting invitations, party ideas, dazzling centerpieces, memorable gifts, unforgettable weddings, and much more!

Gift-giving expert Robyn Spizman has packed Make It Memorable with the most creative ideas under the sun for enlivening every party, event, and occasion with a touch of pizzazz.

Robyn Freedman Spizman has written more than seventy books and is the most recognizable gift-giving expert today. She has been on at least ten thousand live TV segments, is a regular on radio talk shows, and frequently appears on many national shows, including CNN, NBC's Today Show, and Headline News as a gifting expert. She has a popular weekly segment, "Been There, Bought That," on the morning show of NBC's Atlanta affiliate, WXIA, and appears on Star 94 with a show titled The Giftionary, based on her book.


Love adds a precious seeing to the eye. --William Shakespeare MAKE IT MEMORABLE. Copyright © 2004 by Robyn Freedman Spizman Literary Works, LLC. All rights reserved. No part of this book may be used or reproduced in any manner whatsoever without written permission except in the case of brief quotations embodied in critical articles or reviews. For information, address St. Martin's Press, 175 Fifth Avenue, New York, N.Y. 10010.

2. Make It Memorable: An A-Z Guide to Making Any Event, Gift or Occasion.Dazzling! (Paperback or Softback)

3. Make It Memorable : An A-to-Z Guide to Making Any Event, Gift, or Occasion.Dazzling!

6. Make It Memorable : An A-to-Z Guide to Making Any Event, Gift, or Occasion.Dazzling!

7. Make It Memorable: An A-Z Guide to Making Any Event, Gift or Occasion.Dazzling!