Items related to Your Cat: Simple New Secrets to a Longer, Stronger...

Your Cat: Simple New Secrets to a Longer, Stronger Life 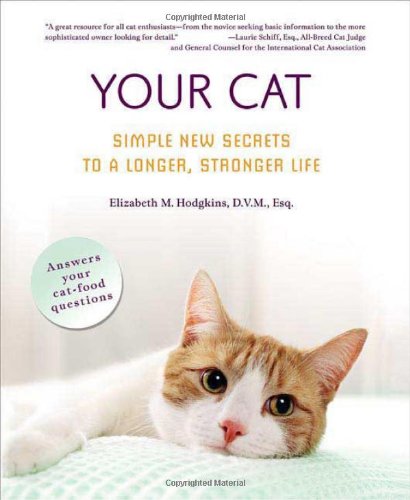 "Dr. Hodgkins's discussions are provocative, and disturbing, and the problems they identify will not be easy to rectify quickly. Nonetheless, they are long overdue."
---Alice Villalobos, president of the American Association of Human-Animal Bond Veterinarians and Director of the Animal Oncology Consultation Service, Woodland Hills (Torrance, CA) and Pawspice Care Clinic (Norwalk, CA)

In this controversial new book, dedicated veterinarian Elizabeth M. Hodgkins, D.V.M., Esq., raises the alarm regarding the serious flaws in the commercial diets we feed our cats and the nutritional diseases that result. Your Cat turns today's conventional wisdom of cat care on its head with completely new yet remarkably easy-to-follow guidelines for every cat owner.

The real problem with pet foodsParasites, vaccines, and litter-box trainingObesity and feline diabetesPreventative nutrition for the older catThe ten great myths of cat care
From kitten-rearing to the adult cat's middle years to caring for the geriatric cat, Dr. Hodgkins explores the full spectrum of proper cat care, as well as rampant deadly feline diseases like hyperthyroidism, asthma, skin allergies, and gum disease. She provides an explanation of the origin and thorough discussion of the very latest treatments. Illuminated by brief case histories from illness to health, this indispensable manual is one book that every modern cat owner must have on their shelf.

Elizabeth M. Hodgkins, D.V.M., Esq., has been a veterinarian since 1977. She currently owns and runs her cats-only veterinary practice, All About Cats Health and Wellness Center, in Yorba Linda, California. Dr. Hodgkins graduated from the University of California at Davis School of Veterinary Medicine and went on to serve as the director of technical affairs at the largest proprietary pet-food manufacturer in the world. During this time, she developed the passion for veterinary nutrition that drove her later investigations into this subject, particularly the management of feline obesity and diabetes.

In 2001, Dr. Hodgkins was awarded a U.S. and international patent for a novel and highly successful approach to managing feline diabetes that has effected long-term remission in well over 80 percent of her diabetic patients. She is also a breeder of internationally award-winning Occicats and exhibits her purebred cats across the U.S.

1. Your Cat: Simple New Secrets to a Longer, Stronger Life

2. Your Cat: Simple New Secrets to a Longer, Stronger Life

3. Your Cat: Simple New Secrets to a Longer, Stronger Life

4. Your Cat: Simple New Secrets to a Longer, Stronger Life

5. YOUR CAT: SIMPLE NEW SECRETS TO