Items related to A Charmed Life: Growing Up in Macbeth's Castle

Campbell, Liza A Charmed Life: Growing Up in Macbeth's Castle

A Charmed Life: Growing Up in Macbeth's Castle 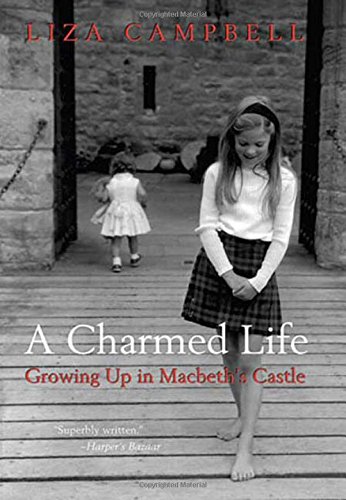 We grew up with the same parents in the same castle, but in many ways we each had a moat around us.  Sometimes when visitors came they would say, “You are such lucky children; it’s a fairytale life you live.” And I knew they were right, it was a fairytale upbringing.  But fairy tales are dark and I had no way of telling either a stranger or a friend what was going on; the abnormal became ordinary.

Liza Campbell was the last child to be born at the impressive and renowned Cawdor Castle, the family seat of the Campbells, as featured in Shakespeare’s Macbeth. Liza’s father Hugh, the twenty-fifth Thane, inherited dashing good looks, brains, immense wealth, an ancient and revered title, three stately homes, and 100,000 acres of land.  A Charmed Life tells the story of Liza’s idyllic childhood with her four siblings in Wales in the 1960s, until Hugh inherited Cawdor Castle and moved his family up to the Scottish Highlands.  It was at the historical ancestral home that the fairytale began to resemble a nightmare.

Increasingly overwhelmed by his enormous responsibilities, Hugh tipped into madness fuelled by drink, drugs, and extramarital affairs.  Over the years, the castle was transformed into an arena of reckless extravagance and terrifying domestic violence, leading to the abrupt termination of a legacy that had been passed down through the family for six hundred years.

Written with a sharp wit, A Charmed Life is a contemporary fairytale that tells what is like to grow up as a maiden in a castle where ancient curses and grisly events from centuries ago live on between its stone walls.  Painstakingly honest and thoroughly entertaining, Liza Campbell offers a compelling look at what it is like to grow up with enormous privilege and yet watch the father she idealizes destroy himself, his family, and his heritage.

Praise for A CHARMED LIFE:

"Beautifully written...eminently readable...A memoir which has many elements to identify with--even if you ain't no Lady." --Tama Janowitz, author of Slaves of New York and Area Code 212

“She writes not from catharsis or revenge, but in the spirit of puzzlement and discovery...Completely compelling.” -- Daily Telegraph (UK)

“A gripping page turner...A CHARMED LIFE is a great title, and Liza Campbell's book lives up to it.” -- Daily Mail (UK)

“A very powerful, painful story...I have never read such a compelling study of addiction...An exceptional writer.” -- Mail on Sunday (UK)

“This is a sad book; yet Campbell’s lack of sentimentality and needle-sharp wit make for a guiltily voyeuristic read.” – Independent (UK)

“A memoir that is as free of self-pity as it is of sentimentality ... Poignant.”

“You are such lucky children,” Liza Campbell was often told, “it’s a fairytale life you live.”  Liza’s father did, after all, hold the title of Thane of Cawdor, and the family divided their time between Cawdor Castle (as featured in Shakespeare’s Macbeth) and other impressive homes in England and Wales.  Theirs was a family with a legacy that had lasted almost a millennium.  Her father would, in the course of his life and his descent in to madness and addiction, fail to pass that legacy along.  He was a man haunted by demons; he would often drink himself into oblivion, recklessly driving along the narrow roads of northern Scotland and Wales, routinely crashing and coming within an inches of death.  In his moments of “reformation,” he still lived in an alternate reality.  This is the story of her early life, her family, and her father's ultimate failure.
This wonderful, heartbreaking, yet ultimately forgiving memoir recalls a childhood played out on an extraordinary and secluded stage.

LIZA CAMPBELL, daughter of the last Thane of Cawdor, grew up in Cawdor Castle in Scotland and at Stackpole, her father’s hundred-thousand acre estate in Wales.  She is an artist, writer, journalist, and calligrapher.  She lives in London with her family.

1. A Charmed Life: Growing Up in Macbeth's Castle

2. A Charmed Life: Growing Up in Macbeth's Castle

3. A Charmed Life: Growing Up in Macbeth's Castle

4. A Charmed Life: Growing Up in Macbeth's Castle

5. A Charmed Life: Growing Up in Macbeth's Castle Campbell, Liza