Items related to A History of Malaysia (MacMillan Asian Histories) 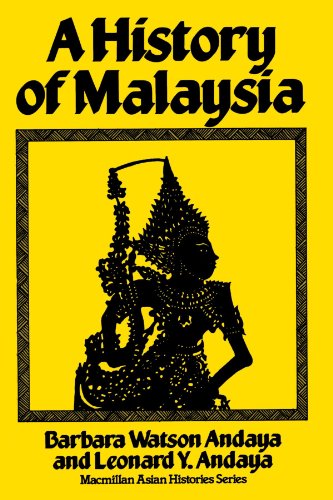 During the past decade a number of historians have carried out fundamental work on various aspects of Malaysian history. These studies reflect the priorities of a new generation of scholars, both Malaysian and Western, whose primary interest is the development of the indigenous society. A history of Malaysia which incorporates recent research is long overdue and this book is intended to fill that gap.

This new history of Malaysia traces events in the Malay world from early times to the twentieth century and shows how they have contributed to the formation of modern Malaysia. The complex cultural heritage of Malaysia is shown to be decisive in shaping its history. But equally important is Malaysia's strategic position on an international trade route linking China, India, and the West. The changing world trade has been a determining factor in the growth and direction of Malaysia's political and social institutions.

In this book, basic new research data on the pre-1800 period gathered not only from European archives but also from an extensive study of indigenous manuscripts and legends are incorporated with a useful synthesis of better known secondary materials. It is therefore both an introductory textbook on Malaysian history and an original contribution to the literature on Malaysia.

Barbara Watson Andaya is a Senior Lecturer in the Department of History, University of Auckland.
Leonard Y. Andaya is professor of Southeast Asian history at the University of Hawai'i.

'This is a second, revised edition of a general history which, since its first appearance in 1982, has become the leader in its field. The authors have retained much of the content of their first edition, but have made significant alterations and additions to bring in the data and analysis of many subjects found in the extensive research and writing of the past twenty years...Students and their teachers will find the new edition a recognizable but considerably revised successor to the original. They will share with the general reader food for thought about Malaysia, ancient and modern. The historical narrative is comprehensive, with very adequate coverage of East Malaysia, impeccable in its scholarship, and clear in its exposition. The annotation is rather sparse but this is supplemented by notes for further reading for each chapter which are historiographical essays. The index, glossary and maps are useful. It is altogether an excellent book.' - John Gullick, Journal of the Malaysian Branch of the Royal Asiatic Society 'In revising their earlier work, already widely acknowledged as a 'standard reference', the authors have rewritten parts of many chapters to incorporate new work on Malaysian history published since the 1980s...so that this new edition encompasses major political events and socio-economic developments from the earliest human settlements up to the present. No other work on Malaysian history covers such a long period...The general reader will find it interesting and students of Malaysian history will find it exceedingly useful. - Tan Liok Ee, The Star 'This second edition incoporates recent findings and amplifies by some 30 pages the period since the Japanese invasion in 1941. Authoritative, stimulating and up to date, this remains the first port of call for scholars, students and any traveller seeking to discover Malaysia's history.' - A.J. Stockwell, Times Higher Education Supplement 'This is the best general history of Malaysia to appear to date.' - A.J. Stockwell, History 'This ... book is ideal for introductory university use ... (The authors) write with impeccable objectivity without ducking the historical dimension of sensitive present-day issues like race relations.' - Dennis Duncanson, Asian Affairs