Items related to Trust Me 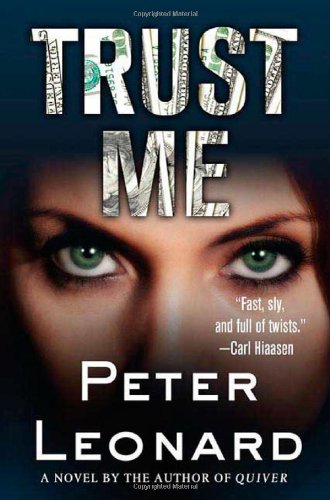 Featuring a virtuoso cast of bad guys, a disgraced ex-cop who finds himself in more trouble than he bargained for, and an anti-heroine to die for, TRUST ME is the superb sophomore novel from one of the emergent voices in crime-writing today.

The first mistake Karen Delaney made was entrusting $300,000 to her boyfriend, Samir, the head of an illegal bookmaking operation. The second was breaking up with him—because Samir holds a $300,000 grudge. A few months later, Karen sees a way to get her money back when two thieves break into her house in the middle of the night. She proposes a scheme to steal Samir’s safe. And then things start to spin dangerously out of control...

Soon Karen finds herself being pursued by a ruthless cast of characters. There’s an ex-con/ex-cop who works for Samir and wants the money for his own retirement. Samir’s nephew, looking pay off his gambling debts. The house-thieves who’ve been double-crossed. And two hit men who view the cash as their stake in the American dream. Now the heat is on...and there’s no one left to trust. Karen is about to learn that some people will do anything in the name of money—at any imaginable cost.

Peter Leonard is the son of Elmore Leonard, the grand master of crime fiction. He lives in Birmingham, Michigan with his wife, Julie, and their four children, Tim, Alex, Max, and Kate. Visit him at www.peterleonardbooks.com.