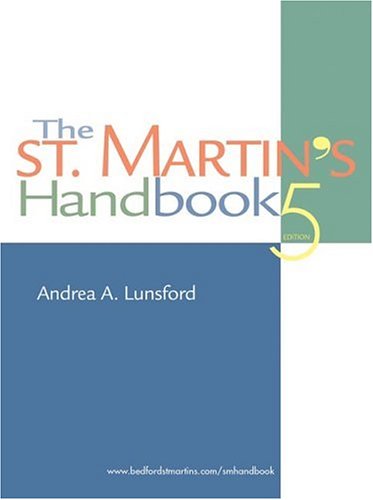 Andrea A. Lunsford's years of experience in the classroom and in the field have given her a unique understanding of how, what, where, and why today's students write. For her research for The St. Martin's Handbook -- ongoing for over two decades -- she has studied thousands of papers by composition students nationwide. Andrea Lunsford's trademark attention to rhetorical choice, language and style, and critical thinking and argument have always made The St. Martin's Handbook an accessible and thorough writing resource. Now informed by new research into student writing patterns and featuring expanded and more visual coverage of research, documentation, and writing in any discipline, The St. Martin's Handbook offers students more help than ever before with meeting the expectations of college work.

ANDREA A. LUNSFORD is Louise Hewlett Nixon Professor of English and director of the Program in Writing and Rhetoric at Stanford University and also teaches at the Bread Loaf School of English. A past chair of CCCC, she has won the major publication awards in both the CCCC and MLA. For Bedford/St. Martin's, she is also the author of Easy Writer (2006), and The Everyday Writer (2005); The Presence of Others (2004) and Everything's an Argument (2007) with John Ruszkiewicz; and Everything's an Argument with Readings (2007) with John Ruszkiewicz and Keith Walters.
EDITORIAL ADVISERS: Nora Bacon, University of Nebraska at OmahaRick Cole, Boston UniversityJudith M. Davis, Hampton UniversityChristy Desmet, University of GeorgiaJudith G. Gardner, University of Texas at San AntonioSara Jameson, Oregon State UniversityMichael A. Keller, South Dakota State UniversityWinnie M. Kenney, Southwestern Illinois CollegeHeidi L. Kolk, Washington University, St. LouisCarole P. Lane, University of Arkansas, FayettevilleStephen M. Levin, Georgia Institute of TechnologyAnnie Perkins, Norfolk State UniversityEileen B. Seifert, DePaul UniversityAnne E. Raines, University of Arkansas, Fayetteville