Items related to The Writer's Presence: A Pool of Readings

The Writer's Presence: A Pool of Readings 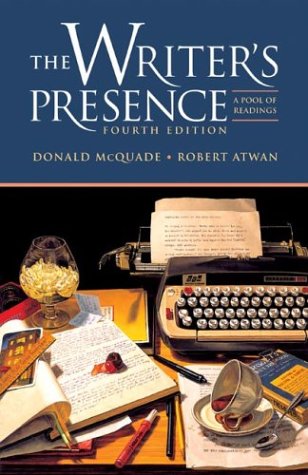 The Writer's Presence combines great writing with a simple organization and uncluttered presentation to give instructors the widest range of options. Each selection showcases a writer's unique voice to demonstrate how writers present themselves through their work and to provide students with models they can use to develop their own voices. Arranged alphabetically by author and by five types of writing (informal, personal, expository, and argumentative writing, as well as short fiction) and with minimal apparatus, the readings allow instructors to be flexible and allow the writing to speak for itself.

Donald McQuade is professor of English and former dean of undergraduate studies at the University of California, Berkeley. He just finished a term serving as Vice Chancellor-University Relations. A past chair of CCCC, he has directed the writing program at Berkeley and at Queens College, CUNY, and has published widely on American literature, American culture, and composition theory and practice. With Bob Atwan, he is coauthor of The Writer s Presence (2009).

Robert Atwan is director of The Blue Hills Writing Institute at Curry College and the series editor of the annual Best American Essays, which he founded in 1985. His essays, reviews, and critical articles have appeared in the New York Times, the Los Angeles Times, The Atlantic Monthly, Iowa Review, Denver Quarterly, Kenyon Review, River Teeth, and many other publications. For Bedford/St. Martin s, he has also edited Ten on Ten: Major Essayists on Recurring Themes (1992); Our Times (1998); and Convergences (2009). He has coedited (with Jon Roberts) Left, Right, and Center: Voices from Across the Political Spectrum (1996), and is coeditor with Donald McQuade of The Writer s Presence (2009).

1. The Writer's Presence: A Pool of Readings

2. The Writer's Presence: A Pool of Readings

3. The Writer's Presence: A Pool of Readings McQuade, Donald and Atwan, Robert