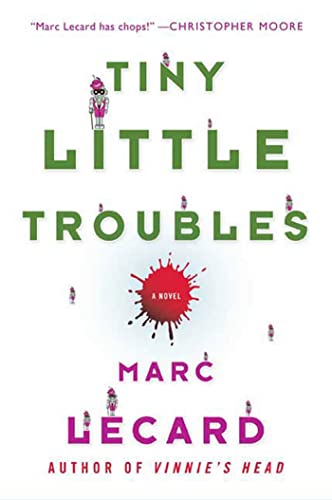 From the critically acclaimed author of Vinnie's Head, comes a fast-paced crime story about an eccentric thug chasing after a piece of nano-technology and the scientist that created it.

Aaron Rogell is a brilliant San Francisco scientist with a nanotech start-up, a beautiful wife, and a brand-new baby. But Aaron has an ugly little problem; he just can't keep it in his pants. Ignoring business and family, he spends most of his quality time with an upscale call girl named Aphrodite, a toothless street hooker, and other less presentable companions. But when one of Aphrodite's lowlife acquaintances--the fearsome Pablo Clench--learns that her new boyfriend has invented a miraculous technology that may be worth fabulous sums of money, life for Aaron Rogell will never be the same again. And soon, Aaron, his wife and child, the bad guys, and just about everyone else ends up with lots of tiny little troubles.

MARC LECARD lives in Oakland, California. He is also the author of Vinnie's Head.

Chapter One  The Edge

Pablo Clench was bored. His shift over, Clench leaned on the bar at the Honeybuzzard in North Beach, sucking down a few tequilas before heading home. The alcohol seemed to be having zero effect on his downer mood. Being night shift floor manager in one of Jimmy Cacapoulos’s San Francisco strip clubs was a pretty good gig, he supposed. Plenty of people would think so; he used to think so himself. Seeing dozens of women bare-ass naked every day had its plusses. He got to bust heads now and then—not as much as when he worked as a bouncer, but enough to keep his hand in. And there were plenty of opportunities to make a little extra cash, what with the girls, who usually had personal problems that could be exploited, and the lust-crazed clientele, their never very outstanding judgment further clouded by waving tits and booty. But it was getting old. Clench’s experience had been, if you’ve seen one bare butt you’ve seen ’em all. After being around constantly naked women a while, the thrill wore off. It got to be like herding cattle. Electric cattle prod, that’s what I need. Clench’s flagging interest level revived briefly. Show ’em who’s boss. But it wouldn’t work. The girls’d complain, go to Jimmy, who protected his strippers—within limits—the way he’d protect any other investment. Jimmy wouldn’t want them shocked and tasered, maybe flopping around the floor in some kind of seizure, or having heart attacks. So that was no good. Fuck the cattle prod. But there had to be something he could do that would bring back the old savor, the edgy sense that he was in charge and making things happen, the feeling that the world was a big piggy bank stuffed with change and he was the hammer, about to break it open and get paid. There was a quarter-size puddle of tequila in the bottom of his glass. Clench killed it, licked the inside of the glass, thought about getting another shot. Nah. It was shit tequila anyway, the same stuff they served the customers. Nothing behind the bar was worth a can of robot piss. Clench levered himself off the bar and walked toward the door. The bartender, busy adding up the night’s receipts and calculating how much he could safely skim, didn’t even look up. Two of the strippers, winding down after their shift, watched him warily from the end of the bar, but Clench ignored them. Outside the club it was dark and cold, the bone-chilling cold of sea wind blowing through a fog bank. No traffic on Broadway, only a few losers straggling along on the dirty sidewalks. The neon signs of the other strip clubs—but not Cacapoulos clubs, Jimmy was very careful about his electricity bill—flashed and glowed further down the street toward Columbus. Another shitty night. Clench wasn’t sleepy. In fact he felt like beating the crap out of someone, just for fun, but the bars were closed already and it was just too much trouble to go looking for an after-hours place. Maybe it was time, Clench thought, to go see some people he hadn’t seen in a while, catch up on the news, find out what was going on. You never knew; might be something he could take advantage of. He thought about some of his old girlfriends. Most of them had left town without telling him where they were going. A few were in jail, or dead. But there was always Aphrodite. Aphrodite Anderson had never been his girl, really. She was Jimmy Cacapoulos’s mistress; Clench had only fucked her to even things up between him and his boss. Then he remembered: Tonight was one of Jimmy’s nights at Aphrodite’s. Whew, close call. The thought of accidentally seeing his boss’s naked buttocks—or any other body part—was enough to put Clench off sex for a month, or longer. Forever. Plus, Jimmy would be pissed if he caught Clench sniffing around, and it was never a good idea to get Jimmy pissed off. So fuck it, Clench thought. I’ll just go home, smoke some weed, get a couple hours shut-eye. Tomorrow, though, tomorrow he would try to scare up something new and profitable. For sure. Excerpted from Tiny Little Troubles by Marc Lecard Copyright © 2008 by Marc Lecard Published in 2008 by St. Martin’s Minotaur All rights reserved. This work is protected under copyright laws and reproduction is strictly prohibited. Permission to reproduce the material in any manner or medium must be secured from the Publisher