Items related to 199 Days: The Battle of Stalingrad

199 Days: The Battle of Stalingrad 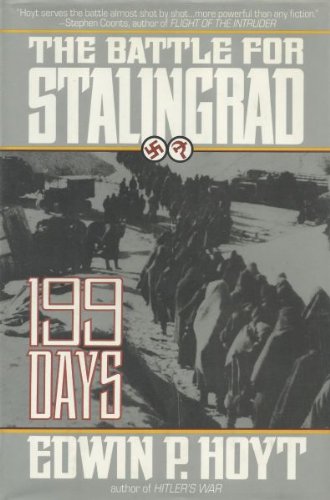 A chronicle of the battle for Stalingrad, based on newly released documents from Moscow and American archives and testimonies from the battle's survivors, describes the battle's participants and more. National ad/promo.

A prolific author of popular works on World War II (including The G.I.'s War , LJ 6/15/88) here provides a well-written narrative of the Battle of Stalingrad and the events leading up to that turning point in the Soviet-German theater of the war. Hoyt adds nothing significant to our knowledge of the operation, but he does successfully and in detail demonstrate Hitler's insistence on controlling the eastern front. He establishes the failure of moral courage on the part of both Friedrich von Paulus and Erich von Manstein, who between them sacrificed an army rather than confront their Fuhrer. On the Soviet side, Hoyt stresses the determined courage of the Red Army's rank and file and the growing sophistication of its higher command. From the war's beginning the Soviets had been willing to die; Stalingrad showed that they had learned how to win. Recommended for general readers.
- D.E. Showalter, U.S. Air Force Acad., Colorado Springs
Copyright 1993 Reed Business Information, Inc.

The battle of Stalingrad (September 1942-February 1943) was the turning point in the Soviet Union's war against Hitler, marking the German army's change from an offensive to a defensive strategy in Russia. The German war machine failed to recoup after seven Soviet armies and some 2000 artillery pieces trapped and crushed Field Marshal Friedrich von Paulus's Sixth Army at Stalingrad. Hoyt ( Hitler's War ), a prolific writer of well-regarded military histories, here delivers a thrilling account of war on a grand scale. His chronicle encompasses the strategic thinking of the opposing warlords, Stalin and Hitler, and their prickly relations with the generals who served under them. Hoyt's superb account, which incorporates new information from Russian archives, is a fitting memorial to the three million who died at Stalingrad. Photos not seen by PW.
Copyright 1992 Reed Business Information, Inc.