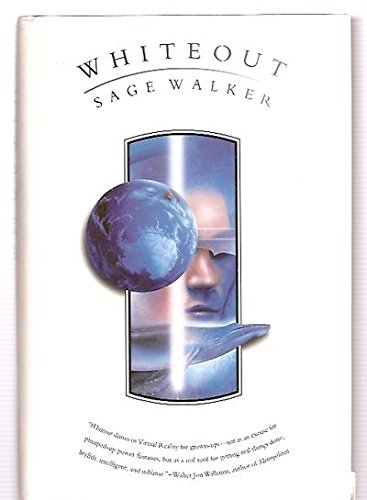 On an Earth of the near future, a world in which multinational corporations control the planet and hunger, poverty, and overpopulation are the norm, a power struggle erupts for control of Antarctica, the last pristine food and water source.

SAGE WALKER was born in Oklahoma and grew up steeped in simile and sultry south wind from the Gulf. She entered college as a music major and exited with a BS in Zoology and eventually a MD. A long time Taos resident, her company established the first full-time Emergency Physician coverage in hospitals in Taos, Los Alamos, and Santa Fe. She stopped practicing in 1987 and describes herself as a burned-out ER doc who enjoys wilderness, solitude, good company...and telling stories. Sage's books include The Man in the Tree.

It's 30 years from now, a time when pollution, collapsing ecosystems, and climatic change mean chronic ill-health, near starvation, and insecurity are normal for most people. An upcoming UN Antarctic Treaty Commission conference in Lisbon will discuss fishing and mineral exploitation. At the same time, Japan's Tanaka corporation, heavily into Antarctic fishing, hires Edges, a business partnership/family unit, to do p.r. work and persuade the delegates to vote the way Tanaka wants. Nearly broke, Edges- -comprising researcher Signy and medic Jared in Taos; artist Pilar and media whiz Janine of Seattle; and New Hampshire-based computer expert Paul--can't afford to turn Tanaka down. Janine is dispatched to Lisbon, while Jared joins a Tanaka harvester ship in the Southern Ocean. Jared arrives just as a dead man is being hauled out of the frigid ocean--but the Tanaka people are curiously reluctant to discuss the matter. Edges keeps in constant touch via virtual reality communications, so that when their systems crash Paul wonders who else might covertly be involved. Then Jared vanishes overboard and is given up for dead. Signy refuses to believe it, however, and rushes to Antarctica to investigate; ugly rumors involving terrorism, piracy and sunken ships begin to surface. Janine, meanwhile, is astonished when the Japanese delegate votes opposite to the way recommended by Edges. Clearly, Tanaka is playing a very deep game, while the Tanaka heir apparent- -the ruthless, ambitious, and potentially immortal San-Li--has an agenda of her own, which Edges must unravel if they are to avoid total disaster. A strikingly assured, mature drama, engrossing and beautifully constructed, with only the ending a tad soggy: an estimable and highly auspicious debut. -- Copyright ©1996, Kirkus Associates, LP. All rights reserved.