Items related to Bijapur (Blood of the Goddess, Vol. 2)

Bijapur (Blood of the Goddess, Vol. 2) 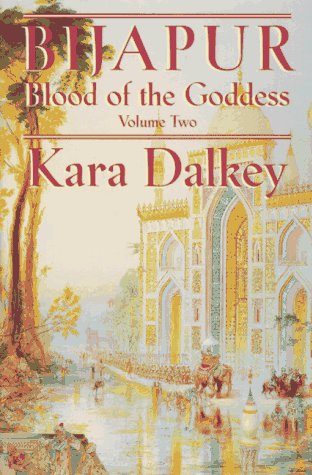 In the second book of the trilogy, the Inquisition of Goa sends an expedition comprised of Father Gonso, apothecary Thomas Chinnery, Lady Aditi, and Andrew Lockhart in search of a mysterious powder, reputed to be the dried blood of a goddess, that can raise the dead

A microcosmos of India assembles in two competing caravans to seek the Blood of the Goddess, among them Thomas Chinnery, English prisoner of the Portuguese Inquisition. The Goddess is reputed to live near Bijapur, and so the two parties make their way there--to be united inextricably by the hospitable and wily Sultan Ibrahim of Bijapur. Prophecies, Sufi mysticism, herb lore, and legends (or are they histories?) gild this exotic historical novel. Kara Dalkey's storytelling is masterfully paced, dark and light, grief and hope, mundane and magical. It is well worth waiting for Volume Three and what promises to be a mesmerizingly suspenseful conclusion.

Continuing the trilogy begun with Goa (1996), Dalkey's agreeably low-key fantasy set in late-16th-century India. The Inquisition of Goa has learned of a powder, reputedly the dried blood of an immortal goddess, that can raise the dead. An expedition to the powder's source gets under way, its members-- among them special investigator Father Gons‡o, young apothecary Thomas Chinnery, the lovely Lady Aditi, and the mysterious Andrew Lockheart--are as various as their motives. At Bijapur in the Deccan, they run into a force of Mughul warriors led by the Mirza Ali Akbarshah, also following up rumors of the marvelous powder. When Gons‡o dies of a fever, Thomas, fearing for his own life, steals the last of Lockheart's hoarded supply of the powder to revivify him. Finally, Gons‡o's soldiers seize Aditi and prepare to torture her to reveal the true source of the powder--Aditi is a secret goddess-worshipper--but Aditi falls on a sword and dies; there's no powder left to resuscitate her. Thereafter, plots thicken and motives congeal as the expedition is forced to join up with the Mughuls in order to proceed. After a dreadful start, all grinding gears and clumsy recaps, Dalkey drops back into an intriguing and tantalizing groove: Fans of the previous volume won't be disappointed. -- Copyright ©1997, Kirkus Associates, LP. All rights reserved.

BIJAPUR (BLOOD OF THE GODDESS, V