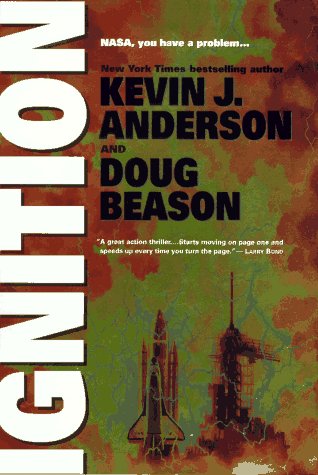 As American and Russian astronauts take their positions aboard the shuttle Atlantis, terrorists seize the Kennedy Space Center and threaten to blow up the shuttle if their demands are not met, and it is up to the mission's injured former commander to stop them. 35,000 first printing.

Kevin J. Anderson has written twenty-seven national bestsellers and has over 15 million books in print worldwide. He has been nominated for the Nebula Award, the Bram Stoker Award, and the SFX Readers’ Choice Award.

Terrorists seize Cape Canaveral at the time of a shuttle launch in a new technothriller from Anderson and Beason (the eco-disaster novel Ill Wind, 1995; etc.). Film rights to Ignition have already been sold, and, indeed, it seems to have been written for easy adaptation into a script: One action scene follows another, and the characters, all stereotypes, are minimally drawn. Mr. Phillips, a fastidious type, the sort often cast as the mastermind in James Bond movies, surrounds himself with several assassins, one of whom is, of course, a slinky female, another of whom, you guessed it, is a pathological explosives-expert. The members of the team demonstrate their ruthlessness at an Ariane launch in French Guiana, blowing up a rocket just after it's launched. Several months later, they capture the command complex at Cape Canaveral just prior to a shuttle launch, blocking out communications with Houston and feeding tapes of prior launches to the public, until they have the mission under their own control. Mr. Phillips even disappoints as a stereotype, since he merely lusts for a ransom in jewels rather than global dominion. He's opposed by the astronaut who had been scheduled to command the mission, ``Iceberg'' Friese, suffering now from a broken ankle, and his sometime lover, the former astronaut Nicole Hunter. Lots of gun battles and explosions ensue as Iceberg saves the world, a US senator is made to look oafish, and the fussy Mr. Phillips falls out of a helicopter. Iceberg is interesting enough to carry the reader along, perhaps, and Anderson and Beason portray Merritt Island and NASA's launch complex convincingly, virtues which, for some, may be enough to excuse the silly plot. Even Steven Seagal's standards are higher than this, but blowing up the Vehicular Assembly Building ought to look good on the screen. (Film rights to Universal) -- Copyright ©1997, Kirkus Associates, LP. All rights reserved.

Book Description Condition: New. As American and Russian astronauts take their positions aboard the shuttle Atlantis, terrorists seize the Kennedy Space Center and threaten to blow up the shuttle if their demands are not met, and it is up to the mission's injured former commander to stop them. 35,000 first printing. Seller Inventory # 9780312862701