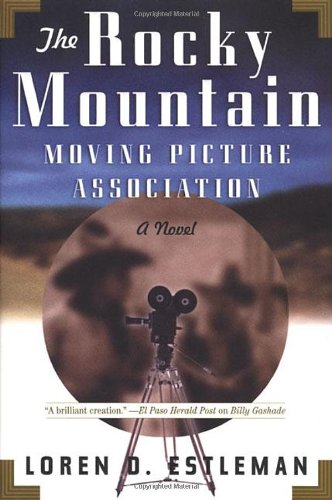 Hollywood, 1913: In the dusty desert community of Los Angeles, a ragtag film company cranks out silent movies in defiance of the law. Young Dmitri Pulski works for his father's ice company in the snowy Sierra Nevadas, and is sent on a journey south to investigate an astonishing order for ten tons of ice by something called the Rocky Mountain Moving Picture Association.  Almost immediately, Dmitri, an aspiring writer, finds himself writing movie scenarios. But things get rocky when the company is threatened with foreclosure by the local sheriff--they're grinding out their movies just outside the reach of the monopolistic Eastern Trust, which claims the exclusive right to make moving pictures under Thomas Edison's patent. The Rocky Mountain Moving Picture Association is the story of the frontier's last boomtown, whose cast of big guns includes D.W. Griffith, Tom Mix, Lillian Gish, and unseen villain Thomas Edison.

Loren D. Estleman was born in Ann Arbor, Michigan, and graduated from Eastern Michigan University with a BA degree in English Literature and Journalism in 1974. In 2002, the university awarded him an honorary doctorate in Humane Letters for his contribution to American literature.

He is the author of more than fifty novels in the categories of mystery, historical western, and mainstream, and has received four Western Writers of American Golden Spur Awards, three Western Heritage Awards, and three Shamus Awards. He has been nominated for the Edgar Allan Poe Award, Britain's Silver Dagger, the National Book Award, and the Pulitzer Prize. In 2003, the mammoth Encyclopedia of Detective Fiction named him the most critically acclaimed writer of U.S. detective