Items related to The Way of the Coyote (Texas Rangers)

Kelton, Elmer The Way of the Coyote (Texas Rangers)

The Way of the Coyote (Texas Rangers) 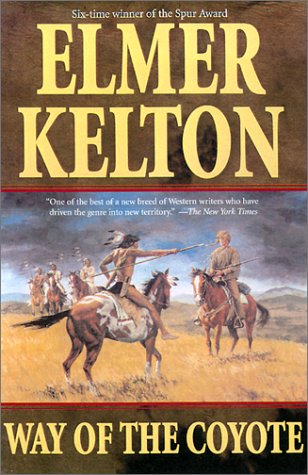 The Civil War has ended, and Union soldiers and federal officials have taken control of Texas as Rusty Shannon rides to his home on the Colorado River. As a child he was a captive of the Comanche, as a young man a proud member of a ranging company protecting settlers from Indian raids. Shannon's fate is intertwined with the young man accompanying him: Andy Pickard, himself but recently rescued from Comanche captivity and known by his captors as Badger Boy. Texas is in turmoil, overrun with murderous outlaws, lawmen exacting penalties from suspected former Confederates, nightriders, and the ever-dangerous Comanche bands. In this tempestuous time and place, Rusty tries desperately to resume his prewar life. His friend Shanty, a freed slave, is burned out of his home by the Ku Klux Klan; his own homestead is confiscated by his special nemesis, the murderous Oldham brothers; and the son of a girl he once loved is kidnapped by Comanches. Elmer Kelton, a master of novelist of the American West, literature, has crafted a satisfying and remarkably accurate tale of Texas life at the end of the Civil War.

Elmer Kelton, most honored of all Western writers, writes of the formative years of the Texas Rangers with the knowledge of a native Texan and the skill of a master storyteller. In Rusty Shannon, tough and smart--necessary survival attributes on the 1860s Texas frontier--Kelton has created one of the most memorable characters in modern Western fiction.

Elmer Kelton, author of more than forty novels, grew up on a ranch near Crane, Texas, and earned a journalism degree from the University of Texas. His first novel, Hot Iron, was published in 1956. For forty-two years he had a parallel career in agricultural journalism.

Among his awards have been seven Spurs from Western Writers of America and four Western Heritage awards from the National Cowboy Hall of Fame. Among his best-known works have been The Time It Never Rained and The Good Old Boys, the latter made into a television film starring Tommy Lee Jones.

He served in the infantry in World War II. He and his wife, Ann, a native of Austria, live in San Angelo, Texas. They have three children, four grandchildren and five great-grandchildren.

1. The Way of the Coyote

2. The Way of the Coyote

3. The Way of the Coyote (Texas Rangers)

4. The Way of the Coyote (Texas Rangers)

5. THE WAY OF THE COYOTE (TEXAS RAN