Items related to For the Love of a Child

Mahmoody, Betty; Dunchock, Arnold D. For the Love of a Child

For the Love of a Child 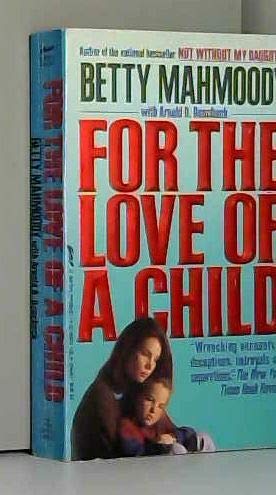 In the sequel to Not Without My Daughter, the author recounts her readjustment to life in America and her husband's quest for revenge, and she tells of other parents who were victims of international abduction. Reprint.

Mahmoody's latest is part autobiographical sequel to her bestselling Not Without My Daughter (1987), part collection of stories of other parents who have suffered the international abduction of their children, and part survey of the laws currently affecting these parents and children. Mahmoody illuminates the horror of the crime of international child abduction and the often hopeless complexity and expense of combatting it. After her own harrowing escape with her six-year-old daughter, Mahtob, from her abusive husband in Iran, Mahmoody returned to America, wrote her bestselling book, witnessed its transformation into a hit movie, and became an active lecturer and frequent talk-show guest. But none of these activities distracted her from the main focus of her life--her daughter, for whose presence Mahmoody daily gave thanks and for whose safety she constantly feared, always expecting her ex-husband to show up to take his revenge. The author's celebrity attracted many heartbroken parents to her, men and women who had had their children abducted abroad by foreign-born mates (Muslim cultures are heavily represented among the abductors). From these stories, Mahmoody distills some cautionary advice for anyone contemplating intercultural marriage. As the world grows smaller, marriages between people of vastly different cultures will become more common, she points out, and while this can be a source of great richness, it can also hold unsuspected perils--especially when children arrive and different cultures clash. Mahmoody describes the shocking powerlessness of government to act against the resultant crimes, and describes changes in international law that her and others' efforts have brought about in recent years. A dramatic story of personal courage combined with an eloquent plea for greater protection of the rights of the world's most vulnerable citizens. -- Copyright ©1992, Kirkus Associates, LP. All rights reserved.

Those who empathized with Mahmoody's thrilling account of her harrowing escape from Iran, where her marriage deprived her of the protection of U.S. law ( Not Without My Daughter , LJ 11/1/87), will want to read this sequel. After returning to the United States, Mahmoody found that her experience was far from unique--that a multitude of foreign spouses have spirited away their children and virtually held them prisoner. Her new book is a compilation of such cases. Most are not as lucky as Mahmoody, and she devotes much time informing people about international parental abductions and the lack of laws to cover them. Although some international conventions have been signed, they lack adequate means of enforcement, and the right of children to remain in the place they call home is not always respected. Congress has yet to act at all. An excellent purchase for public libraries. Previewed in Prepub Alert, LJ 5/15/92.
- Louise Leonard, Univ. of Florida Libs., Gainesville
Copyright 1992 Reed Business Information, Inc.

6. For the Love of a Child Mahmoody, Betty and Dunchock, Arnold D.