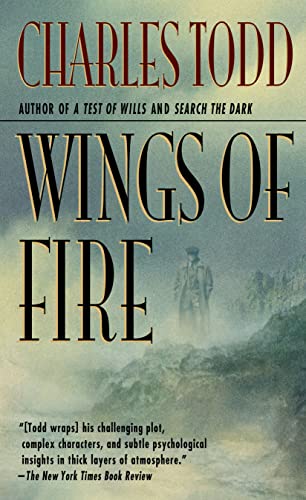 In Charles Todd's Wings of Fire, Inspector Ian Rutledge is quickly sent to investigate the sudden deaths of three members of the same eminent Cornwall family, but the World War I veteran soon realizes that nothing about this case is routine. Including the identity of one of the dead, a reclusive spinster unmasked as O. A. Manning, whose war poetry helped Rutledge retain his grasp on sanity in the trenches of France. Guided by the voice of Hamish, the Scot he unwillingly executed on the battlefield, Rutledge is driven to uncover the haunting truths of murder and madness rooted in a family crypt...

When A Test of Wills, Charles Todd's first mystery about a shell-shocked World War I veteran, came out, it was such an original and successfully executed concept that readers were torn between wanting more and wondering how he could possibly pull off a sequel. Todd does it very simply: he pushes the gimmick sideways and makes his Scotland Yard detective, Ian Rutledge, much more personally involved in the death of one of the possible murder victims than he was in the first book. While the voice of Hamish, the Scottish soldier he executed for battlefield cowardice, still growls in his mind, Inspector Rutledge also feels very deeply about Olivia Marlowe, a supposed suicide in the Cornwall town of Borcombe. He knew her as O. A. Manning, a poet whose books, especially the love poems collected in Wings of Fire, were "light and warmth and beauty intermingled with such passion that they sang in the heart as you read them. Wings of Fire had touched him in ways that few things had." Olivia's death, along with that of two members of her family, have brought Rutledge from London to investigate. But, as a sharp local clergyman tells him, "Be sure your own ghosts don't infringe on your logical mind--don't rain havoc on Borcombe in search of your own absolution."

"Fine Writing. A spectacular conclusion that rejuvenates the cliche 'It was a dark and stormy night.'" --Washington Post Book World

"A strong mystery, filled with fine characterizations [and] a superb eye for Cornwall...Wise and wily." --The Boston Globe

6. WINGS OF FIRE: AN INSPECTOR IAN