Items related to The Phantom of Manhattan

Forsyth, Frederick The Phantom of Manhattan

The Phantom of Manhattan 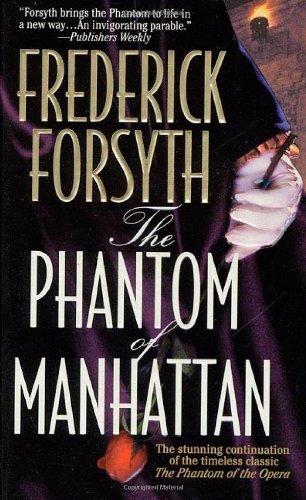 The stunning continuation of the timeless classic The Phantom of the Opera.

In The Phantom of Manhattan, acclaimed, bestselling suspense novelist Frederick Forsyth pens a magnificent work of historical fiction, rife with the insights and sounds of turn-of-the-century New York City, while continuing the dramatic saga which began with Gaston Leroux's brilliant novel The Phantom of the Opera...

More than two decades have passed since Antoinette Giry, the mistress of the corps de ballet at the Paris Opera, rescued a hideously disfigured boy named Erik from a carnival and brought him to live in the labyrinthine cellars of the opera house. Soon thereafter, his intense, unrequited love for a beautiful chorus girl set in motion a tragic string of events, forcing him to flee Paris forever. Now, as she lies dying in a convent, Madam Giry tells the untold story of the Phantom and his clandestine journey to New York City to start anew, where he would become a wealthy entrepreneur and build the glorious Manhattan Opera House...all so he could see his beloved, now a famous diva, once again. But the outcome of her visit would prove even more devastating than before-- and yet, would allow the Phantom to know, for the first time in his brutal life, the true meaning of love...

Frederick Forsyth is the author of nine bestselling novels: The Day of the Jackal, The Odessa File, The Dogs of War, The Devil's Alternative, The Fourth Protocol, The Negotiator, The Deceiver, The Fist of God, and Icon. His other works include The Biafra Story, The Shepherd, and a short story collection, No Comebacks.

1. The Phantom of Manhattan

2. THE PHANTOM OF MANHATTAN

3. The Phantom of Manhattan

4. The Phantom of Manhattan