Items related to Mad About Maddie 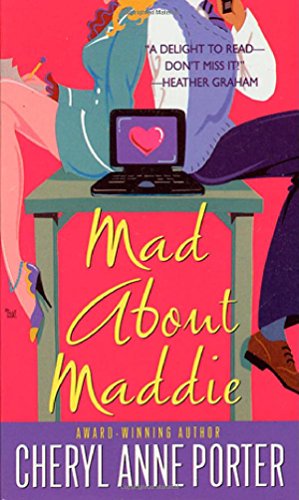 Everybody of picturesque Hanscomb Harbor knows about pretty shop owner Maddie Copeland's bad luck. Getting bitten by a dog has made her absolutely phobic about the critters. getting left at the altar has made her just as scared of romance. But when a summer resident, a dear, yet quirky, old man named James dies and leaves a will behind naming Maddie as his heir, her luck starts to look up--that is, until she meets James's handsome, bachelor grandson...

When Henry "Hank" Madison III hears the terms of his wealthy grandfather's will, he is outrage. If he wants to remain acting CEO of James's corporation, Hank must live in Hanscomb Harbor for six weeks, with not a laptop in sight. And if that isn't bad enough, he has to share his inheritance with some blond bombshell! But Hank isn't about to let some gold-digger rob him of what's rightfully his--even if she does take his breath away every time she is near...and even if he is hopelessly losing his heart to her.

A National Readers Choice Award winner, Porter is best known for her gripping historical romantic suspense. Captive Angel earned Publishers Weekly's prestigious Starred Review for the author in 1999. Her other historical titles have garnered consistent critical acclaim and numerous honors, not least of which was the Library of Congress' selecting her Jessie's Outlaw for its Rare Book Collection. The prolific writer also has a second place Madcap Comedy Award finish to her credit. A popular keynote and workshop speaker, Porter teaches college-level fiction writing near her home on Florida's West Coast.

Energetic prose and snappy dialogue spice up Porter's (Wild Flower, etc.) frothy romantic confection. When Hanscomb Harbor gift shop owner Maddie Copeland befriends elderly billionaire James Madison, she hardly expects to be named the sole heir to his vast fortune after his death. Maddie doesn't want James's estate, his golden retriever (she's scared stiff of dogs), or the lobster-shaped urn that holds James's ashes. But she will be stuck with it all unless his grandson, Hank Madison, takes a six-week sabbatical from the family advertising firm to relax in Maddie's home town. If Hank, a workaholic by nature, can successfully take a vacation sans cell phone, pager and fax machine, he will reclaim his rightful fortune. If not, he loses it all. At first, Hank figures Maddie is just another gold-digging blond bombshell. After a while, he begins to understand that his grandfather merely wanted to force Maddie and himself together. Since Maddie doesn't want James's money and Hank does, all they can do is make the best of an awkward situation while trying to ignore the attraction simmering between them. Some readers will enjoy the book's cute, albeit stereotypical cast, but uninspiring main characters and an overdone plot will leave others longing for something more substantial.