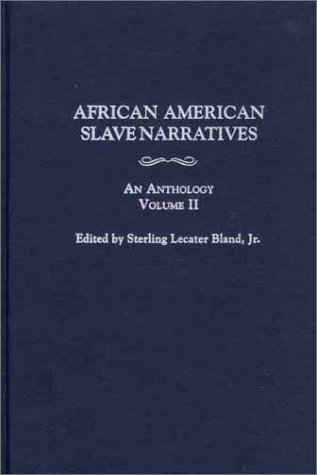 African American slave narratives of the 19th century recorded the atrocities of the antebellum South and provided a solid foundation for the African American literary tradition. By presenting 16 slave narratives in their entirety, this reference conveniently documents this historically significant literary genre. A vivid and moving history of African Americans seeking to establish community, liberty, economic independence, and education within the constraints of a repressive society. This reference intentionally avoids well-known narratives and instead collects unavailable and otherwise difficult-to-find texts. To add to the value of the work for researchers and general readers alike, each narrative is accompanied by a preface, explanatory notes, and suggestions for further reading.

Many of the narratives gathered here were influential when initially published; Josiah Henson's presentation of himself, for example, embodies many of the characteristics given to Uncle Tom by Harriet Beecher Stowe in her novel Uncle Tom's Cabin. While other collections often only provide excerpts from widely available texts, this reference includes complete narratives. The introductions and annotations redefine current thinking in the field by closely examining how these authors used language, structured their writing, and crafted their autobiographies. By examining the historical, cultural, literary, and social issues that African Americans have faced since their arrival, this reference provides the broad context necessary to understand the literary, social, and intellectual traditions from which these writings developed.

STERLING LECATER BLAND, JR. is Assistant Professor of English at Rutgers University. His previous publications include Voices of the Fugitives: Runaway Slave Stories and Their Fictions of Self-Creation (Greenwood, 2000, also available as a Praeger paperback).