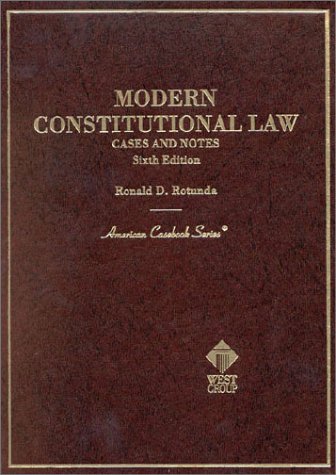 Since the first edition of Modern Constitutional Law was published nearly 20 years ago, it has continued to be one of the best sellers in a very competitive market. Professor Thomas E. Baker, who holds the prestigious James Madison Chair in Constitutional Law at Drake University, stated that he has "been so loyal to the Rotunda brand name over the years," because the book is compact without being superficial. It "remarkabl[y]" manages "to include all the important cases yet preserves a fuller set of opinions to guarantee 'thoughtful classroom discussion.'"

Is a Professor of Law at the University of Illinois College of Law. Previously, he was Assistant Counsel to the Senate Watergate Committee, practiced law in Washington, D.C., and clerked for Judge Walter R. Mansfield of the Second Circuit of Appeals. He has also served as a visiting Professor of Law at the European University Institute in Florence, Italy. A former editor of the Harvard Law Review, Professor Rotunda graduated magna cum laude from Harvard Law School and Harvard University. He is a member of the American Law Institute, a member of the Multistate Professional Responsibility Examining Committee, and a former editor of the Board of Contributing Editors of the Corporation Law Review. He has also authored Modern Constitutional Law: Cases and Notes, as well as various other books and articles on constitutional law and legal ethics.

Book Description Hardcover. Condition: Good. Item may show signs of shelf wear. Pages may include limited notes and highlighting. May include supplemental or companion materials if applicable. Access codes may or may not work. Connecting readers since 1972. Customer service is our top priority. Seller Inventory # mon0001454019

Book Description Hardcover. Condition: Good. No Jacket. Item is in good condition. Some moderate creases and wear. This item may not come with CDs or additional parts including access codes for textbooks. This may not have a dust jacket. Might be an ex-library copy and contain writing/highlighting. Photos are stock pictures and not of the actual item. Seller Inventory # DS-0314246525-3