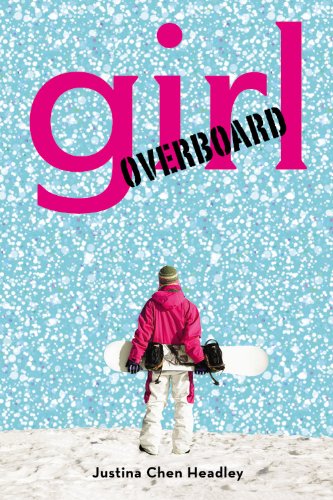 Everybody thinks Syrah is the golden girl. After all, her father is Ethan Cheng, billionaire, and she has everything any kid could possibly desire: a waterfront mansion, jet plane, and custom-designed snowboards. But most of what glitters in her life is fool's gold. Her half-siblings hate her, her best friend's girlfriend is ruining their friendship, and her own so-called boyfriend is only after her for her father's name. When her broken heart results in a snowboarding accident that exiles her from the mountains-the one place where she feels free and accepted for who she is, not what she has-can Syrah rehab both her busted-up knee, and her broken heart?
Justina Chen Headley writes with an engaging wit and a powerful, distinct voice. Her first novel, Nothing But the Truth (and a few white lies) was a Border's Original Voices nominee, a Book Sense pick, and received a starred review from Publisher's Weekly: "Headley makes an impressive debut with this witty, intimate novel."

Justina Chen Headley grew up near Buffalo, NY and San Francisco. After attending Stanford University she spent time in New York and Sydney, Australia before settling near Seattle, Washington, where she currently lives with her two children. This is Justina's second YA novel. Her first, Nothing But the Truth (and a few white lies), was a Book Sense pick, and her third novel, North of Beautiful, garnered critical acclaim with three starred reviews.

From the moment that “snowboarding became as natural as walking,” 15-year-old Syrah Cheng has wanted to be a professional rider. But after she narrowly survives an avalanche, her parents bar her from the sport. Syrah misses the anonymity and escape she found on the slopes. As the daughter of a billionaire cell-phone magnate, she feels misunderstood in public and abandoned at home by her workaholic, absentee parents, and her isolation intensifies after her only close friend, Age, stops returning her calls. Then Syrah develops a close friendship with fellow-student Lillian, whose sister is dying of cancer. A project to help Lillian’s family becomes the energizing force that pulls Syrah toward new discoveries about her own family, cultural heritage, and strengths. Writing in Syrah’s witty, engaging voice, Headley offers a stirring, layered novel about a Chinese American girl who rejects the false glitter of her superrich Seattle community and resolves to use her advantages to create large-scale change and relationships that are deep and true. Grades 7-11. --Gillian Engberg