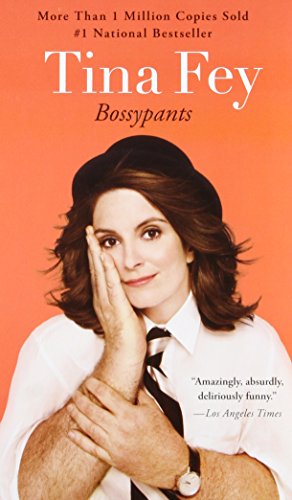 Spirited and whip-smart, these laugh-out-loud autobiographical essays are "a masterpiece" from the Emmy Award-winning actress and comedy writer known for 30 Rock, Mean Girls, and SNL (Sunday Telegraph).
Before Liz Lemon, before "Weekend Update," before "Sarah Palin," Tina Fey was just a young girl with a dream: a recurring stress dream that she was being chased through a local airport by her middle-school gym teacher. She also had a dream that one day she would be a comedian on TV.
She has seen both these dreams come true.
At last, Tina Fey's story can be told. From her youthful days as a vicious nerd to her tour of duty on Saturday Night Live; from her passionately halfhearted pursuit of physical beauty to her life as a mother eating things off the floor; from her one-sided college romance to her nearly fatal honeymoon -- from the beginning of this paragraph to this final sentence.
Tina Fey reveals all, and proves what we've always suspected: you're no one until someone calls you bossy.
(Includes Special, Never-Before-Solicited Opinions on Breastfeeding, Princesses, Photoshop, the Electoral Process, and Italian Rum Cake!)

Amazon Best Books of the Month, April 2011: Tina Fey’s new book Bossypants is short, messy, and impossibly funny (an apt description of the comedian herself). From her humble roots growing up in Pennsylvania to her days doing amateur improv in Chicago to her early sketches on Saturday Night Live, Fey gives us a fascinating glimpse behind the curtain of modern comedy with equal doses of wit, candor, and self-deprecation. Some of the funniest chapters feature the differences between male and female comedy writers ("men urinate in cups"), her cruise ship honeymoon ("it’s very Poseidon Adventure"), and advice about breastfeeding ("I had an obligation to my child to pretend to try"). But the chaos of Fey’s life is best detailed when she’s dividing her efforts equally between rehearsing her Sarah Palin impression, trying to get Oprah to appear on 30 Rock, and planning her daughter’s Peter Pan-themed birthday. Bossypants gets to the heart of why Tina Fey remains universally adored: she embodies the hectic, too-many-things-to-juggle lifestyle we all have, but instead of complaining about it, she can just laugh it off. --Kevin Nguyen

Tina Fey lives in Denver with her ferret, Jacoby.