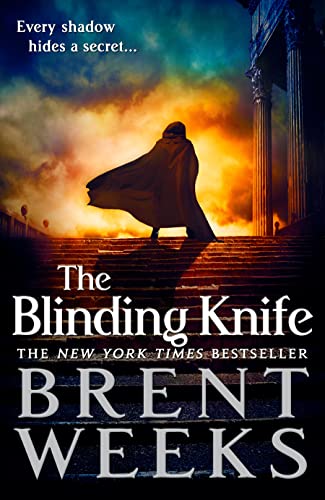 He'd thought he had five years left--now he has less than one. With fifty thousand refugees, a bastard son, and an ex-fiancée who may have learned his darkest secret, Gavin has problems on every side. All magic in the world is running wild and threatens to destroy the Seven Satrapies. Worst of all, the old gods are being reborn, and their army of color wights is unstoppable. The only salvation may be the brother whose freedom and life Gavin stole sixteen years ago.
Read the second book in Brent Weeks's blockbuster epic fantasy series that had Peter V. Brett saying, "Brent Weeks is so good, it's starting to tick me off!"

For more from Brent Weeks, check out:
Night Angel
The Way of Shadows
Shadow's Edge
Beyond the Shadows

Brent Weeks was born and raised in Montana. He wrote on bar napkins and lesson plans before landing his dream job years and thousands of pages later. Brent lives in Oregon with his wife, Kristi, and their daughters. Find out more about the author at www.brentweeks.com or on twitter @brentweeks.

"Brent Weeks is so good it's starting to tick me off."―Peter V. Brett, New York Times bestselling author of The Desert Spear

"The Blinding Knife by Brent Weeks was even better than The Black Prism (and that's saying something!)"―B&N.com

"One of the best epic fantasies I've ever read."―Staffer's Book Review on The Blinding Knife

"The Blinding Knife is a wonderful work of high fantasy with engaging characters facing the perfect antagonists, set in a creatively-wrought and increasingly chaotic world brimful of imaginative magic and interesting politics. Weeks holds fast to the traditions of his genre while adding a compelling new flavor."―The Ranting Dragon

"One of the best Fantasy books of 2012."―A Dribble of Ink on The Blinding Knife

"Weeks has written an epic fantasy unlike any of its contemporaries. It is a truly visionary and original work, and has set the bar high for others in its subgenre."―graspingforthewind.com

"Weeks manages to ring new tunes on...old bells, letting a deep background slowly reveal its secrets and presenting his characters in a realistically flawed and human way."―Publishers Weekly on The Black Prism

9. The Blinding Knife (Paperback or Softback)