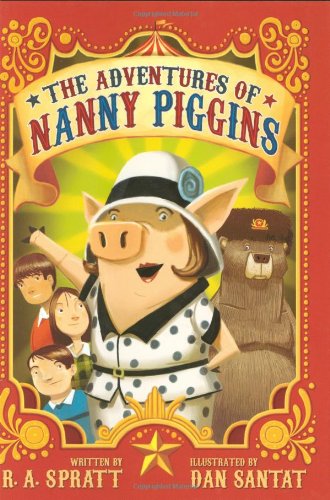 The three Green children are cared for by a nanny pig. Yes, a pig--a fabulously sassy and impeccably dressed pig, as a matter of fact! With her insatiable urge to eat chocolate (and feed chocolate to everyone she loves), her high-flying spirit, and her unending sense of fun, Nanny Piggins takes Derrick, Samantha, and Michael on a year of surprises, yummy treats, and adventures they'll never forget.

It's no surprise that Booklist proclaimed, "Mary Poppins, move over--or get shoved out of the way." Nanny Piggins is a refreshing and dynamic addition to favorite classic nannies: Amelia Bedelia, Mrs. Piggle Wiggle, and, of course, Mary Poppins.

About the Author:
Rachel Spratt is a stand-up comedian and has been writing comedy for television for over ten years. Her work has appeared on PBS (Raggs) and on nearly every major television network in Australia. She lives in Sydney with her husband and daughter. This is her first novel.

One day a year he is Santa Claus, but the other 364 days Dan Santat works as a children's book writer and commercial illustrator while fighting crime on the side. He is also the creator of Disney's animated hit, The Replacements. Dan graduated with distinction from the Art Center College of Design. He lives in Southern California with his wife Leah, two kids, a rabbit, a bird, and one cat.
From Booklist:
*Starred Review* Mary Poppins, move over—or get shoved out of the way. Nanny Piggins has arrived. Most recently employed at the circus as the pig shot out of a cannon, she assumes the title Nanny when she spies a Help Wanted sign on the lawn of the Green family. Mrs. Green is dead, and Mr. Green is so tightfisted he refuses to pay a human nanny. So when a pig applies . . . . But as the three Green children soon realize, Nanny Piggins is a jewel. Extraordinarily clever, she knows when to morph that quality into deviousness, which certainly becomes necessary when dealing with the dull, pompous Mr. Green. The children—Derrick, Samantha, and Michael—promptly fall in love with Nanny Piggins because she lets them eat sweets all day and comes up with the most marvelous ideas, like taking a boat to China to get Chinese takeout. Even when things don’t exactly work out as planned (and they rarely do), the high jinks and hilarity make them excellent adventures. Stuffing adjectives into this review is as easy as watching Nanny Piggins stuff pies into her mouth. This is smart, sly, funny, and marvelously illustrated with drawings that capture Nanny’s sheer pigginess. Readers may worry that this first novel is so full of stories about Nanny Piggins there won’t be enough left for sequels. Never fear. The last line of the book predicts Nanny will be stirring up more adventures, possibly even before breakfast. Grades 3-6. --Ilene Cooper

THE ADVENTURES OF NANNY PIGGINS