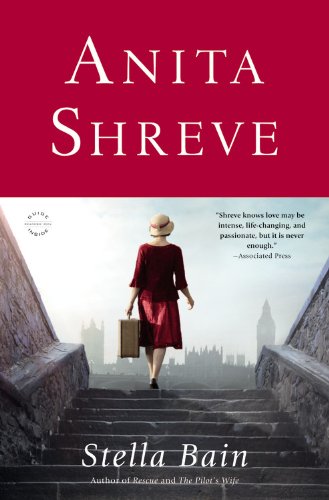 "Shreve's 17th novel is a tragic yet hopeful story of love, memory, loss, and rebuilding....The novel is both tender and harsh....Shreve's thoughtful, provocative historical tale has modern resonance." ---Publishers Weekly
Stella Bain has no memory of her past when she wakes up in a hospital bed in Marne, France. It is 1916, and she wears the uniform of a British war nurse but speaks with an American accent. As soon as she is able, Stella sets out for London, where she hopes to find answers. What she discovers-with the help of Dr. August Bridge, who takes an interest in her case-both shocks and startles. As Stella's memories come racing back, she must undertake a journey across the ocean to confront the haunted past of the woman she used to be.

In this gripping historical drama that transports us from Europe to America and back again, Anita Shreve weaves an engrossing tale about love and memory, set against the backdrop of a war that devastated an entire generation.

Anita Shreve is the acclaimed author of 16 previous novels, including Rescue, A Change in Altitude; Testimony; The Pilot's Wife, which was a selection of Oprah's Book Club; and The Weight of Water, which was a finalist for England's Orange prize. She lives in Massachusetts.

Shreve's 17th novel is a tragic yet hopeful story of love, memory, loss, and rebuilding. A young woman wakes up with amnesia in a battlefield hospital tent in Marne, France, in 1916. She thinks her name is Stella Bain, and she thinks she knows how to nurse and drive an ambulance. As she recovers, she returns to duty in this new environment, caring for the wounded and dying. When she arrives in the city exhausted and destitute, she's discovered in a park by a doctor's wife, who takes her in. The doctor, Augustus Bridge, is a cranial surgeon with an interest in psychiatry. Stella becomes a €œquasi-patient€ ; he finds a way to get her into the Admiralty, and, when a former friend recognizes her by name, her memories return, including the fact that she has children—and the reason why she left them. The amnesia and its cause are only part of the story; the lack of understanding at the time of the consequences of witnessing the horrors of war, for both men and women, also plays a key role. The novel is both tender and harsh, and the only false note is the use of present tense, which prevents the reader from being pulled in more closely. Shreve's thoughtful, provocative, historical tale has modern resonance. Agent: Jennifer Rudolph Walsh, WME Entertainment. (Nov.)

Book Description Paperback. Condition: New. Paperback. Shipping may be from multiple locations in the US or from the UK, depending on stock availability. 288 pages. 0.249. Seller Inventory # 9780316098892