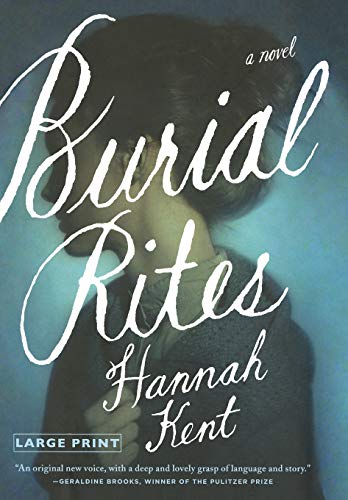 *Soon to be a major motion picture starring Jennifer Lawrence*

A brilliant literary debut, inspired by a true story: the final days of a young woman accused of murder in Iceland in 1829.

Set against Iceland's stark landscape, Hannah Kent brings to vivid life the story of Agnes, who, charged with the brutal murder of her former master, is sent to an isolated farm to await execution.

Horrified at the prospect of housing a convicted murderer, the family at first avoids Agnes. Only Tóti, a priest Agnes has mysteriously chosen to be her spiritual guardian, seeks to understand her. But as Agnes's death looms, the farmer's wife and their daughters learn there is another side to the sensational story they've heard.

Riveting and rich with lyricism, BURIAL RITES evokes a dramatic existence in a distant time and place, and asks the question, how can one woman hope to endure when her life depends upon the stories told by others?

Book Description Hardback. Condition: New. Large type / large print edition. Language: English. Brand new Book. Based on a true story, Burial Rites is a superb debut novel which explores the case of the last woman to be publicly beheaded in Iceland in 1829. Agnes Magnusdottir has been charged with the brutal murder of Natan Ketilsson, her former employer, and has been sent to an isolated residence where she is to be detained throughout her trial. Horrified at having a cold murderer in their midst the family, especially Margret the farmer's wife, who live at the property treat her with disdain and caution. A young assistant priest, Toti, has been appointed her spiritual guardian and must regularly visit her in an attempt to salvage her soul. Through Toti's visits, the family learns more about Agnes and the crime she's apparently committed and as the days to the beheading draw closer, they realise all is not what it first seemed. Seller Inventory # APC9780316239806

Shipping: US$ 4.12
From United Kingdom to U.S.A.
Destination, rates & speeds