Items related to The Last Lecture 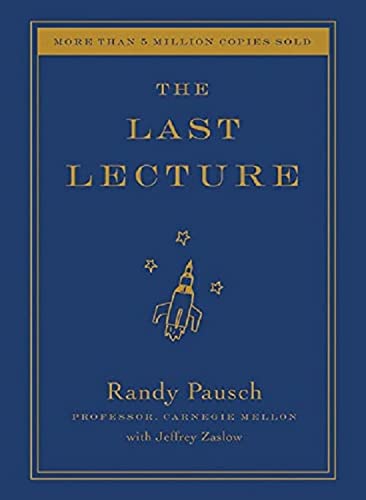 "We cannot change the cards we are dealt, just how we play the hand."---Randy Pausch

A lot of professors give talks titled "The Last Lecture." Professors are asked to consider their demise and to ruminate on what matters most to them. And while they speak, audiences can't help but mull the same question: What wisdom would we impart to the world if we knew it was our last chance? If we had to vanish tomorrow, what would we want as our legacy?

When Randy Pausch, a computer science professor at Carnegie Mellon, was asked to give such a lecture, he didn't have to imagine it as his last, since he had recently been diagnosed with terminal cancer. But the lecture he gave--"Really Achieving Your Childhood Dreams"--wasn't about dying. It was about the importance of overcoming obstacles, of enabling the dreams of others, of seizing every moment (because "time is all you have...and you may find one day that you have less than you think"). It was a summation of everything Randy had come to believe. It was about living.

In this book, Randy Pausch has combined the humor, inspiration and intelligence that made his lecture such a phenomenon and given it an indelible form. It is a book that will be shared for generations to come.

Randy Pausch was a Professor of Computer Science, Human-Computer Interaction, and Design at Carnegie Mellon, where he was the co-founder of Carnegie Mellon's Entertainment Technology Center (ETC). He was a National Science Foundation Presidential Young Investigator and a Lilly Foundation Teaching Fellow. He had sabbaticals at Walt Disney Imagineering and Electronic Arts (EA), and consulted with Google on user interface design. Dr. Pausch received his bachelors in Computer Science from Brown University and his Ph.D. in Computer Science from Carnegie Mellon University. He was the director of the Alice (www.alice.org) software project, and had traveled in zero-gravity. He lived with his wife, Jai, and their three young children in Virginia.

Jeff Zaslow wrote the Wall Street Journal column that fueled the initial interest in Randy Pausch's lecture. He is also the co-author of Captain Chesley Sullenberger's The Highest Duty and the author of The Girls from Ames, both bestsellers.

A sort of reverse engineering created this recording of Pausch's book of life lessons, based on his lecture "Really Achieving Your Childhood Dreams"first a sensation as a viral video on YouTube. The video, the book, and the audiobook are now part of the legacy Pausch left after his death from pancreatic cancer in July 2008. Narrator Erik Singer skillfully becomes Pausch for listeners. He adopts the Carnegie Mellon computer science professor's direct, exuberant manner but tempers it with the serious and wistful reflection that the work embodies. Singer gets across the "live in the moment" philosophy that Pausch embraced and creates an audio experience that honors him. Worth multiple re-listenings and sharings. R.F.W. © AudioFile 2008, Portland, Maine