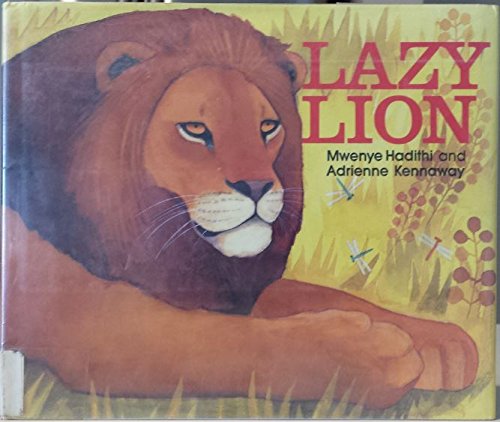 Too lazy to build his own shelter before the Big Rain comes, Lion orders the other animals to do it for him, but when none meet his standards, Lion pays a soggy price for his laziness

Author: Mwenye Hadithi was born in Nairobi in a rambling brick and wood house surrounded by ten acres. His early life was full of animals. He attended London University, studying languages and foreign literature. When his first attempts at short stories and radio plays were sold immediately, he decided to be the next great African Writer.

Illustrator: Adrienne Kennaway moved from Kenya to London when she was 15 to study at the Ealing School of Art. Later she attended L'Academia de Belle Arte in Rome. It was on her return to Kenya that she began illustrating the picture books that have made her well known.

In his original African pourquoi stories, Hadithi cleverly imbues his animals with human foibles ( Crafty Chameleon 1987, Greedy Zebra 1984, Tricky Tortoise 1988, all Little) to offer humorous, entertaining, and just-maybe possible explanations for their unique animal behavior. This time he looks at the languid lion who takes passing notice of the gathering rain clouds above the open plain and invokes his royal privilege to order an appropriately stately domicile. Not only is he too lazy to construct his own home, but he also turns up his nose at the accommodations offered by his more industrious neighbors. When the Big Rain comes, the others all rush off to the shelter of their hills, nests, caves, etc., leaving the king of the beasts to roam the plains in the rain--as is his way. Kennaway extends the simple text and dazzles readers with her bold, dramatic watercolors executed largely in golds, browns, and greens. She captures the stark beauty of the sun-parched land, its frantic inhabitants, and the ominous skyscape. The imminent rains are palpable. Kennaway's animals are always expressive, almost caricatures of themselves, yet remain essentially animal-like and true to their own natures. A satisfying safari. --Luann Toth , School Library Journal
Copyright 1990 Reed Business Information, Inc.