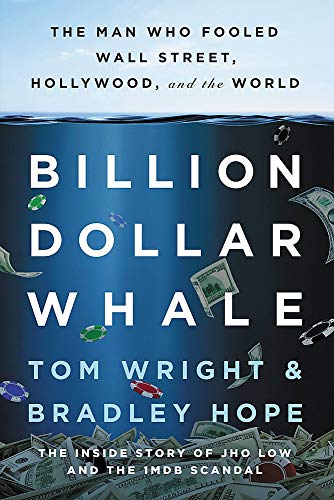 Book Description Paperback. Condition: GOOD. Spine creases, wear to binding and pages from reading. May contain limited notes, underlining or highlighting that does affect the text. Possible ex library copy, will have the markings and stickers associated from the library. Accessories such as CD, codes, toys, may not be included. Seller Inventory # 3458689290

Book Description Condition: Good. Ships from the UK. Used book that is in clean, average condition without any missing pages. Seller Inventory # 18963283-20

Shipping: US$ 6.75
From United Kingdom to U.S.A.
Destination, rates & speeds

Billion Dollar Whale: The Inside Story of Jho Low and the 1MDB Scandal

Billion Dollar Whale: The Man Who Fooled Wall Street, Hollywood and the World

Book Description Paperback. 1810. The "extraordinary" (Financial Times) instant New York Times bestseller exposing how a "modern Gatsby" swindled over $5 billion with the aid of Goldman Sachs and others--a "must read" (Booklist) tale of finance run amok and "the heist of the century" (Axios). In 2009, with the dust yet to settle on the financial crisis, a mild-mannered Wharton grad set in motion a fraud of unprecedented gall and magnitude--one that would come to symbolize the next great threat to the global financial system. The scandal is known as 1MDB, and the man behind it, Jho Low, is a figure so preposterous he might seem made up. "An epic tale of white-collar crime on a global scale" (Publishers Weekly, starred review), Billion Dollar Whale reveals how this young social climber pulled off one of the biggest heists in history. Over a half decade, Low siphoned billions from an investment fund--right under the nose of the global financial industry. Low used the money to finance elections, purchase luxury real estate, throw champagne-drenched parties, and even to finance Hollywood films like The Wolf of Wall Street. Federal agents who helped unravel Bernie Madoff's Ponzi scheme say the 1MDB affair will become the textbook case of financial fraud in the modern age--and its fallout is already being credited for taking down the prime minister of Malaysia. With his yacht and private jet reportedly seized by authorities and facing money-laundering charges in Malaysia, an Interpol red notice, and an ongoing U.S. Department of Justice Investigation, Low has become an international fugitive. Billion Dollar Whale will join the ranks of Liar's Poker, Den of Thieves, and Bad Blood as a classic harrowing parable of the financial world, hubris, and greed. 3 Centimeters X 15.3 Centimeters X 22.8 Centimeters. Seller Inventory # 15507155