Items related to Hiroshima: Why America Dropped the Atomic Bomb 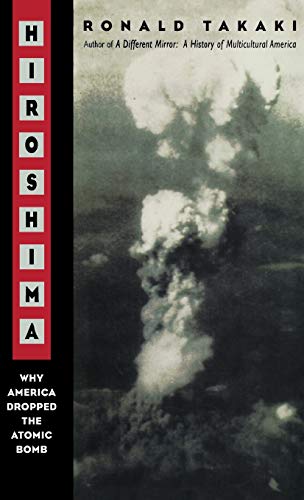 The bombing of Hiroshima was one of the pivotal events of the twentieth century, yet this controversial question remains unresolved. At the time, General Dwight Eisenhower, General Douglas MacArthur, and chief of staff Admiral William Leahy all agreed that an atomic attack on Japanese cities was unnecessary. All of them believed that Japan had already been beaten and that the war would soon end. Was the bomb dropped to end the war more quickly? Or did it herald the start of the Cold War? In his probing new study, prizewinning historian Ronald Takaki explores these factors and more. He considers the cultural context of race - the ways in which stereotypes of the Japanese influenced public opinion and policymakers - and also probes the human dimension. Relying on top secret military reports, diaries, and personal letters, Takaki relates international policies to the individuals involved: Los Alamos director J. Robert Oppenheimer, Secretary of State James Byrnes, Secretary of War Henry L. Stimson, and others... but above all, Harry Truman.

Ronald Takaki is a professor of Ethnic Studies at the University of California, Berkeley.

A widely accepted theory is that President Harry Truman ordered the atomic bomb dropped on Japan to end the war quickly and to avoid the massive casualties that would have occurred during an Allied invasion. That view, according to Takaki, is simplistic. He argues that Truman's overriding concern-American policy toward the Soviet Union-led him to hope that a combat demonstration of the bomb in Japan would lead to Soviet postwar cooperation and discourage that country's imperialist expansion. Takaki also contends that the President's readiness to use the bomb was linked to America's racial rage against the Japanese and to Truman's own racist attitudes. Takaki's Harry Truman will be unfamiliar to most readers: insecure, unable to say no to strong-willed officials such as Secretary of State James Byrnes, struggling to overcome his childhood identity as a sissy by means of macho behavior, suffering remorse over his historic decision. Right or wrong, the study is a provocative addition to the unresolved debate over the dropping of the atomic bombs. Takaki is a professor of ethnic studies at UC Berkeley. Photos.
Copyright 1995 Reed Business Information, Inc.

8. Hiroshima: Why America Dropped the Atomic Bomb Tag: Author of a Different Mirror