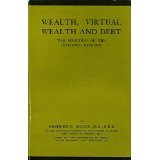 Wealth, Virtual Wealth and Debt is a 1926 book by the Nobel prize-winning chemist Frederick Soddy on monetary policy and society and the role of energy in economic systems. Soddy criticized the focus on monetary flows in economics, arguing that "real" wealth was derived from the use of energy to transform materials into physical goods and services. Soddy's economic writings were largely ignored in his time, but would later be applied to the development of ecological economics in the late 20th century. In his 1926 book Wealth, Virtual Wealth and Debt: The Solution of the Economic Paradox (a book that presaged the market crash of 1929) Soddy pointed out the fundamental difference between real wealth - buildings, machinery, oil, pigs - and virtual wealth, in the form of money and debt. Soddy wrote that real wealth was subject to the inescapable entropy law of thermodynamics and would rot, rust, or wear out with age, while money and debt - as accounting devices invented by humans - were subject only to the laws of mathematics. Rather than decaying, virtual wealth, in the form of debt, compounding at the rate of interest, actually grows without bounds. Soddy used concrete examples to demonstrate what he considered this flaw in money economics in his book. "Debts are subject to the laws of mathematics rather than physics. Unlike wealth, which is subject to the laws of thermodynamics, debts do not rot with old age and are not consumed in the process of living. On the contrary, they grow at so much per cent per annum, by the well-known mathematical laws of simple and compound interest ... It is this underlying confusion between wealth and debt which has made such a tragedy of the scientific era."

1. Wealth, Virtual Wealth and Debt: The Solution of the Economic Paradox

Book Description Noontide Pr, 1987. Condition: Good. A+ Customer service! Satisfaction Guaranteed! Book is in Used-Good condition. Pages and cover are clean and intact. Used items may not include supplementary materials such as CDs or access codes. May show signs of minor shelf wear and contain limited notes and highlighting. Seller Inventory # 0317532189-2-4