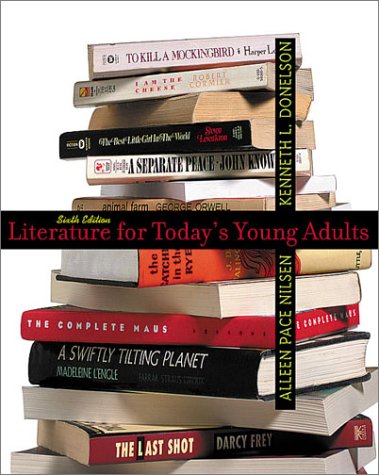 Writing with the belief that students will have a better chance of becoming life-long readers if they have choices and enjoy what they read, renowned authors Alleen Nilsen and Ken Donelson offer a comprehensive, reader-friendly introduction to young adult literature framed within a literary, historical, and social context. The authors provide teachers with criteria for evaluating books of all genres, from poetry and nonfiction to mysteries, science fiction, and graphic novels. Coverage of timely issues such as pop culture and mass media have been added to help teachers connect with students' lives outside the classroom.

Literature for Today's Young Adults Gets Better and Better...

With new features and thoroughly updated, the number one book in Young Adult Literature continues to help teachers learn how to motivate teenagers to become life-long readers. Written with the belief that students will have a better chance of becoming life-long readers if they have choices in what they read and if they enjoy it, renowned authors Alleen Nilsen and Ken Donelson offer a comprehensive, reader-friendly introduction to young adult literature framed within a rich literary, historical, and social context.

New To This Edition!

“...students have responded that this is the best textbook they have ever used in any class and that it is one they will not “sell back” to the bookstore.”
Professor Cora Dunkley, University of South Florida

Ken Donelson and Alleen Nilsen have a long history of working to promote reading by young adults. In the 1970's, they co-founded what is now The ALAN Review for the Assembly on Literature for Adolescents of NCTE, and in the 1980's they were co-editors of The English Journal. Although Dr. Donelson retired from ASU in 2002, they continue to work together to make this seventh edition as updated, and as comprehensive and readable as its predecessors.

Ken Donelson and Alleen Nilsen, professors of English at Arizona State University, became friends and colleagues before they met each other. They both earned their Ph.D. degrees at the University of Iowa from G. Robert Carlsen, a pioneer in the field of young adult literature. Ken was Carlsen’s first Ph.D. student, with Alleen coming along a decade later. When Alleen and her husband moved to Arizona State in 1973, one of the first people she visited was Ken because Professor Carlsen had talked about him in class and had recruited Alleen as a writer for the Arizona English Bulletin, which Ken was editing.

Nevertheless, Professor Carlsen was surprised when his two former students, who happened to find themselves in the same part of the country, started working together because he thought they were so different.  Ken writes like a historian, focusing on what’s old, while Alleen writes like a journalist, focusing on what’s new. And while Ken was a leader in fighting censorship, Alleen was a leader in fighting sexist language, which some people interpret as a form of censorship. She is the one who suggested they take turns with whose name goes first on each edition.  In spite of their differences, what they learned from Professor Carlsen brought them together in support of the academic study of young adult literature.  In 1973, they helped found ALAN (Assembly on Literature for Adolescents of NCTE); both have received ALAN’s Award for “Outstanding Contributions to the Field of Young Adult Literature,” and both served as presidents of ALAN. In 1974, they were the founding editors of The ALAN Newsletter, the forerunner of what is now The ALAN Review.  After proving that they respected each other and could work together, they applied to be coeditors of the English Journal, a job they held from 1980 to 1987 when they wrote the first edition of Literature for Today’s Young Adults.

Thanks to Ken’s knowledge of history and his interest in censorship, the book was more complete than other textbooks of the time which mostly focused on realistic problem novels–books sometimes identified as bildungsroman or

apprenticeship novels–which are still the books most obviously identified as YA. But what Ken and Alleen demonstrated was that every genre, from adventure and biography to mysteries, fantasy, poetry, and the supernatural, were being written for teenagers and deserved a place in schools and libraries. And because Alleen’s first job at Arizona State University was teaching in the Department of Library Science in the College of Education, it seemed natural for them to bring in the work of librarians and reading teachers as well as of English teachers.

What has kept Literature for Today’s Young Adults the leading textbook in the field is the authors’ continuing love and enthusiasm for their chosen field of study. For each edition they have highlighted new and interesting trends and illustrated them with lively discussions of well-written books. It has helped that they are well-rounded scholars and have remained active in education as a whole.

Ken has published over five hundred articles, mostly on censorship, YA books, and problems in teaching secondary English reflecting his thirteen years of teaching high school English in Iowa. His articles, as well as others related to college teaching, have appeared in such journals as Clearing House, English Journal, High School Journal, and School Library Journal. Ken collected YA books published from 1850 through 1950 and when he retired from ASU he donated some eight hundred historical YA books and a nearly complete run of The Dime Novel Round-Up to ASU’s Hayden Library. The collection is strong in books by Kirk Munroe, Ralph Henry Barbour, and John Tunis, and in two Stratemeyer Literary Syndicate heroes, Tom Swift and Nancy Drew.  Alleen has worked with her husband, linguistics Professor Don L. F. Nilsen, to promote a new approach to the teaching of vocabulary, as explained in Vocabulary Plus: High School and Up: A Source-Based Approach and Vocabulary Plus K—8: A Source-Based Approach (Pearson, 2004). Their Encyclopedia of 20th-Century American Humor (Oryx/Greenwood) was chosen by the American Library Association as one of the twenty best reference books published in 2000. In 2007, they published Names and Naming in Young Adult Literature as part of the Scarecrow Series in Young Adult Literature, edited by Patty Campbell. Alleen is also the author of Joan Bauer, the first book in Greenwood Press’s series Teen Reads: Student Companions to Young Adult Literature (2007), edited by James Blasingame.