Items related to Literature: An Introduction to Fiction, Poetry, and...

Literature: An Introduction to Fiction, Poetry, and Drama, Ninth Edition 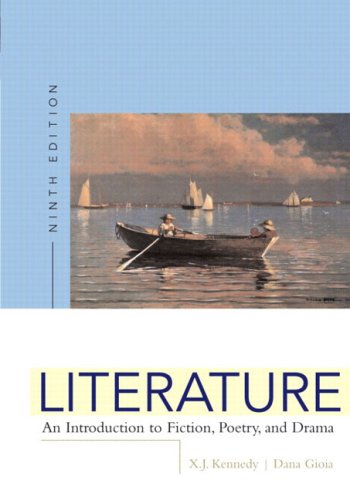 Literature, 9/e, the most popular introduction of its kind, is organized into three genres¤Fiction, Poetry, and Drama. As in past editions, the authors' collective poetic voice brings personal warmth and a human perspective to the discussion of literature, adding to students' interest in the readings. An introduction to a balance of contemporary and classic stories, poems, and plays. Casebooks offer in-depth look at an author or clusters of works, for example “Latin American Poetry. Authors Joe Kennedy and Dana Gioia provide inviting and illuminating introductions to the authors included and to the elements of literature. Coverage of writing about literature is also included. For those interested in literature.

X.J. Kennedy, after graduation from Seton Hall and Columbia, became a journalist second class in the Navy ("Actually, I was pretty eighth class"). His poems, some published in the New Yorker, were first collected in Nude Descending a Staircase (1961). Since then he has written five more collections, several widely adopted literature and writing textbooks, and seventeen books for children, including two novels. He has taught at Michigan, North Carolina (Greensboro), California (Irvine), Wellesley, Tufts, and Leeds. Cited in Bartlett's Familiar Quotations and reprinted in some 200 anthologies, his verse has brought him a Guggenheim fellowship, a Lamont Award, a Los Angeles Times Book Prize, an award from the American Academy for Poetry for Children from the National Council of Teachers of English. He now lives in Lexington, Massachusetts, where he and his wife Dorothy have collaborated on four books and five children.

Dana Gioia is a poet, critic, and teacher. Born in Los Angeles, he attended Stanford and Harvard before taking a detour into business. ("Not many poets have a Stanford M.B.A., thank goodness!") After years of writing and reading late in the evenings after work, he quit a vice presidency to write and teach. He has published three collections of poetry: Daily Horoscope (1986); The Gods of Winter (1991); Interrogations at Noon (2001), winner of the 2001 American Book Award; an opera libretto, Nosferatu (2002); several anthologies; and an influential study of poetry's place in contemporary America, Can Poetry Matter? (1992). Gioia has taught at Johns Hopkins, Sarah Lawrence, Wesleyan (Connecticut), Mercer, and Colorado College. He is also the co-founder of the summer poetry conference at West Chester University in Pennsylvania and a frequent commentator on literature for the British Broadcasting Corporation. He currently lives in Santa Rosa, California, with his wife, Mary, two sons, and an ever growing number of cats.

(The surname Gioia is pronounced JOY-A. As some of you may have already guessed, gioia is the Italian word for joy.)

1. Literature: An Introduction to Fiction, Poetry, and Drama, Ninth Edition

2. Literature: An Introduction to Fiction, Poetry, and Drama, Ninth Edition

3. LITERATURE: AN INTRODUCTION TO F