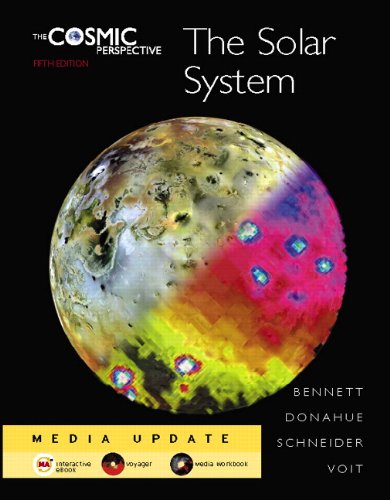 Building on a long tradition of effective pedagogy and comprehensive presentation, The Cosmic Perspective: The Solar System Media Update , Fifth Edition includes Voyager: SkyGazer planetarium software, an updated Astronomy Media Workbook on CD-ROM at no extra charge, and an enhanced MasteringAstronomy™ online tutorial and assessment system. This edition’s expanded visual pedagogy features new Cosmic Context two-page illustrations that walk you through key processes and summarize the major concepts in each Part. Zoom-in figures also provide a sense of orientation, scale, and relation between images. In addition to its enhanced visuals, the text also features See It For Yourself boxes with practical hands-on activities for in-class use or self-study, and a new set of Process of Science end-of-chapter questions that challenge you to think through how we know what we know about astronomy. Renowned for its up-to-date, expert coverage and strong pedagogical support for learning, the Media Update Fifth Edition retains and builds on all the features and supplements from previous editions that have helped to make it the most widely adopted astronomy textbook. Offered with The Cosmic Perspective: The Solar System Media Update, Fifth Edition is an unparalleled media package.

The Cosmic Perspective: The Solar System Media Update, Fifth Edition includes Chapters 1-14, S1,  and Chapter 24. For the full version of the textbook that includes all chapters, refer to ISBN-10: 0321551389.

Jeffrey Bennett holds a B.A. (1981) in biophysics from the University of California, San Diego, and an M.S. and Ph.D.(1987) in astrophysics from the University of Colorado, Boulder. He has taught at every level from preschool through graduate school, including more than 50 college classes in astronomy, physics, mathematics, and education. He served 2 years as a visiting senior scientist at NASA headquarters, where he created NASA’s “IDEAS” program, started a program to fly teachers aboard NASA’s airborne bservatories (including the hopefully soon-to-be-flying SOFIA), and worked on numerous educational programs

for the Hubble Space Telescope and other space science missions. He also proposed the idea for and helped develop

both the Colorado Scale Model Solar System on the CU-Boulder campus and the VoyageScale Model Solar System on the National Mall in Washington, D.C. (He is pictured here with the model Sun.) In addition to this astronomy textbook, he has written college-level textbooks in astrobiology, mathematics, and statistics; two books for the general public, On the Cosmic Horizon (Pearson Addison-Wesley, 2001) and Beyond UFOs (Princeton University Press, 2008); and an award-winning series of children’s books that includes Max Goes to the Moon, Max Goes toMars, Max Goes to Jupiter (coming soon), and Max’s Ice Age Adventure. When not working, he enjoys participating in masters swimming and in the daily adventures of life with his wife, Lisa; his children, Grant and Brooke; and his dog, Cosmo. His personal Website is www.jeffreybennett.com.

Megan Donahue is an associate professor in the Department of Physics and Astronomy at Michigan State University. Her current research is mainly on clusters of galaxies: their contents—dark matter, hot gas, galaxies, active galactic nuclei—and what they reveal about the contents of the universe and how galaxies form and evolve. She grew up on a farm in Nebraska and received a B.A. in physics from MIT, where she began her research career as an X-ray astronomer. She has a Ph.D. in astrophysics from the University of Colorado, for a thesis on theory and optical observations of intergalactic and intracluster gas. That thesis won the 1993 Trumpler Award from the Astronomical Society for the Pacific for an outstanding astrophysics doctoral dissertation in North America. She continued postdoctoral research in optical and X-ray observations as a Carnegie Fellow at Carnegie Observatories in Pasadena, California, and later as an STScI Institute Fellow at Space Telescope. Megan was a staff astronomer at the Space Telescope Science Institute until 2003, when she joined the MSU faculty. Megan is married to Mark Voit, and they collaborate on many projects, including this textbook and the raising of their children,Michaela, Sebastian, and Angela. Between the births of Sebastian and Angela, Megan qualified for and ran the Boston Marathon. These days,Megan runs, orienteers, and plays piano and bass guitar whenever her children allow it.

of Colorado and a researcher in the Laboratory for Atmospheric and Space Physics. He received his B.A. in physics and astronomy from Dartmouth College in 1979 and his Ph.D. in planetary science from the University of Arizona in 1988. In 1991, he received the National Science Foundation’s Presidential Young Investigator Award. His research interests include planetary atmospheres and planetary astronomy, with a focus on the odd case of Jupiter’s moon Io. He enjoys teaching at all levels and is active in efforts to improve undergraduate astronomy education. Off the job, he enjoys exploring the outdoors with his family

and figuring out how things work.

Mark Voit is an associate professor in the Department of Physics and Astronomy at Michigan State University. He earned his B.A. in astrophysical sciences at Princeton University and his Ph.D. in astrophysics at the University of Colorado in 1990. He continued his studies at the California Institute of Technology, where he was a research fellow in theoretical astrophysics, and then moved on to Johns Hopkins University as a Hubble Fellow. Before going to Michigan State,Mark worked in the Office of Public Outreach

at the Space Telescope, where he developed museum exhibitions about the Hubble Space Telescope and was the scientist behind NASA’s HubbleSite. His research interests range from interstellar processes in our own galaxy to the clustering of galaxies in the early universe. He is married to coauthor Megan Donahue, and they try to play outdoors with their three children whenever possible, enjoying hiking, camping, running, and orienteering.Mark is also author of the popular book Hubble Space Telescope: New Views of the Universe.