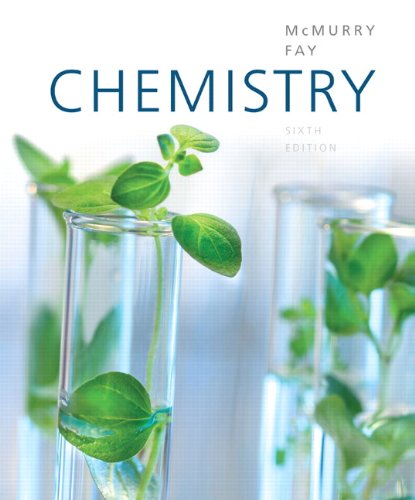 When you see the connections, you’ll see the chemistry. Today’s students use textbooks differently than in the past; and Chemistry , Sixth Edition is designed to map to the way you seek and process information. This book is known for a smart, precise presentation that blends the quantitative and visual aspects of general chemistry. Features like Remember..., Conceptual Problems, Conceptual Worked Examples, Inquiry and Worked Examples make these critical connections clear and visible, so you’ll really see the chemistry the first time.

JOHN MCMURRY, educated at Harvard and Columbia, has taught approximately 17,000 students in general and organic chemistry over a 30-year period. A Professor of Chemistry at Cornell University since 1980, Dr. McMurry previously spent 13 years on the faculty at the University of California at Santa Cruz. He as received numerous awards, including the Alfred P. Sloan Fellowship (1969-71), the National Institute of Health Career Development Award (1975-80), the Alexander von Humboldt Senior Scientist Award (1986-87), and the Max Planck Research Award (1991).

JORDAN FANTINI, Associate Professor of Chemistry and Biochemistry at Denison University, has been teaching general and organic chemistry for the past 14 years.  Known for his interactive lectures, Dr. Fanitini has been a student favorite for years.

Shipping: US$ 30.31
From United Kingdom to U.S.A.
Destination, rates & speeds