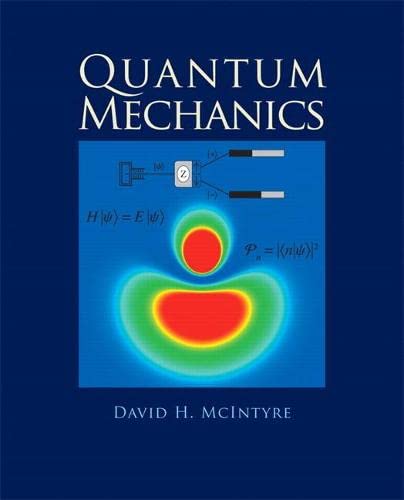 This innovative new text presents quantum mechanics in a manner that directly reflects the methods used in modern physics research—making the material more approachable and preparing students more thoroughly for real research. Most texts in this area start with a bit of history and then move directly to wave-particle problems with accompanying heavy mathematical analysis; Quantum Mechanics provides a foundation in experimental phenomena and uses a more approachable, less intimidating, more powerful mathematical matrix model. Beginning with the Stern-Gerlach experiments and the discussion of spin measurements, and using bra-ket notation, the authors introduce an important notational system that is used throughout quantum mechanics. This non-traditional presentation is designed to enhance students’ understanding and strengthen their intuitive grasp of the subject.

David H. McIntyre received a B.S. degree in physics from the University of Arizona and M.S. and Ph.D. degrees in physics from Stanford University.  He has been on the physics faculty at Oregon State University since 1989 and is one of the original developers of the Paradigms in Physics program.  His other teaching interests include computational physics, computer interfacing, and optical physics.  His laboratory research interests are in laser spectroscopy and optical physics.

Corinne A. Manogue received an A.B. degree in mathematics and physics from Mount Holyoke Collegeand a Ph.D. degree in physics from the University of Texas at Austin.  She has been on the physics faculty at Oregon State University since 1988 and is the Director and one of the original developers of the Paradigms in Physics program.  She is a Fellow of the American Physical Society and was awarded the Excellence in Undergraduate Physics Teaching Award from the American Association of Physics Teachers in 2008.   She is coauthoring a textbook on The Geometry of Vector Calculus. Her theoretical research interests use the octonions to parameterize higher dimensional theories of particle physics.

Janet Tate received a B.Sc. degree in physics and chemistry from the University of Natal and M.S. and Ph.D. degrees in physics from Stanford University.  She has been on the physics faculty at Oregon State University since 1989 and is one of the original developers of the Paradigms in Physics program.  She is particularly interested in helping students to improve their critical thinking skills, especially through experimental work and writing.  Her laboratory research interests are in experimental condensed matter physics.

Book Description Pearson, 2012. Condition: New. Brand new book. This is an international edition textbook with identical content as the US version and is usually paperback bound instead of hardcover. We ship all our orders from CA/IL, USA (depending on your address) and NOT from Asia! Buy with confidence from a 5-star US based seller. Choose expedited shipping for superfast delivery with tracking. Seller Inventory # 833|9780321765796

Book Description Pearson, 2012. soft cover. Condition: New. International Edition. No supplemental materials. International Editions may have a different cover or ISBN but generally have the exact same content as the US edition, just at a more affordable price. In some cases, end of chapter questions may vary slightly from the US edition. International Editions are typically printed in grayscale, and likely will not have any color throughout the book. New. Books ship from multiple locations depending on availability. All orders are shipped with tracking information. We take pride in our customer service. Please contact us if you have any questions regarding this listing. Seller Inventory # 12694

Book Description Addison-Wesley, 2012. Softcover. Condition: New. ***International Edition***Soft cover/Paperback*** Textbook printed in English. ***Brand New***. Most international edition has different ISBN and Cover design. Some book may show sales disclaimer such as "Not for Sale or Restricted in US" on the cover page but it is absolutely legal to use. All textbook arrives within 5-7business days. Please provides valid phone number with your order with easy delivery. Seller Inventory # C9780321765796